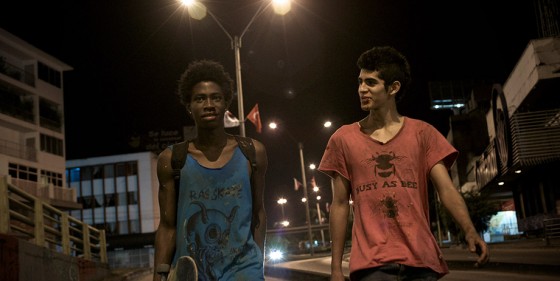 Los Hongos translates to “The Mushrooms,” and while there are a couple of joints smoked in Oscar Ruiz Navia’s follow-up to his acclaimed debut feature Crab Trap, the alluded-to hallucinogens never arrive. Metaphorically speaking, young graffiti artists Ras (Jovan Alexis Marquinez Angulo) and Calvin (Calvin Buenaventura Tacon) might be mushrooms; their street-art expressionism is rooted in a rotting society, trying to push through its surfaces. Yet to really bring about change, they’d have to make up their minds about what it is they really want to do.

Calvin, who comes from a middle-class family, is enrolled in an art course at college, and spends most of his time taking care of his ailing grandmother. He uses his time at granny’s house to watch Arab Spring videos and plot out his illegal painting projects, which are meant to express some sense of political solidarity. Ras lives with his black and deeply religious family in a far poorer part of Cali, and Navia is sensitive to the ethnic differences and economic disparities of his hometown, using atmospheric tracking shots to establish a sense of place. He’s also good at letting the background action convey thematic information, as in a televised appearance by Calvin’s political-activist father and a scene where Ras’ mother sings an a cappella ballad. At the same time, the characters’ lack of direction seems to infect the movie itself. Like Calvin and Ras, it may be that Los Hongos is too aimless to really leave its own mark.