TIFF 2014 | I Am Not Lorena (Isidora Marras, Chile/Argentina) — Discovery 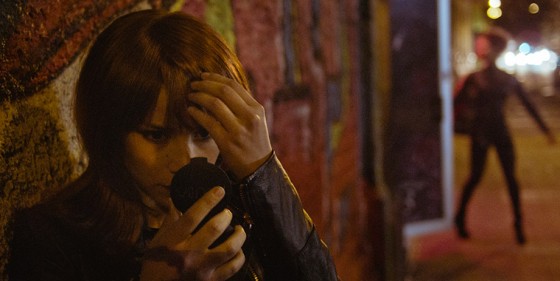 This is an exceedingly slight debut film about an actress named Olivia (Loreto Aravena) beset by an endless barrage of calls from collection agencies, all looking for someone named Lorena Ruíz. In reality, there are some fairly basic steps to take if one finds oneself in a similar predicament. (I speak from experience.) However, I Am Not Lorena shows our protagonist being thwarted at every turn, in order that a charitable critic might refer to the film as “Kafkaesque.” And of course, since Olivia is persistently being given the old Althusserian Hail as the wrong subject, Marras takes the opportunity to send her down a spiral of self-questioning identity disruption. That I Am Not Lorena would head in this direction should be obvious from its very first reel. To wit: Olivia’s mother Eleanora (Paulina García) is suffering from Alzheimer’s. The first scene in the film has the woman screaming at “that old hag” to get out of her way. She’s confronting a mirror, naturally. After a subway trip visually rendered with great care to provide Olivia’s dark, fragmented reflection while the train speeds through a tunnel (this image never gets old), we encounter Olivia’s trans neighbour Rosetta (Maho Farías) in and out of drag, and then learn that the play Olivia’s working on—her ex the production’s writer-director, no less—is about a couple who reconnect in a death pact after 15 years apart. In light of all this, the extended scene in which Olivia tries on wig after wig and considers her “new” reflections may not be entirely necessary for Marras to make sure her subtext comes through. But you can never be too sure, I suppose. If I were Lorena, I would be dodging calls from everyone concerned with this project, and you might consider changing your SIM card.