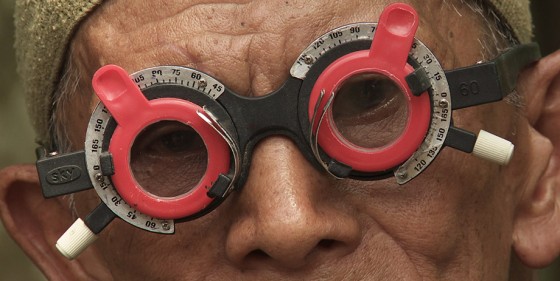 In Joshua Oppenheimer’s sequel to his Oscar-nominated The Act of Killing, the focus shifts from the colourful perpetrators of the crimes that the Indonesian junta committed in the mid-’60s so that Shell, BP, Goodyear and other companies could access the country’s natural resources to the killers’ victims. We follow an optometrist visiting his patients in the Indonesian countryside to measure their sight and provide them with a new pair of glasses, but what the intrepid optometrist really wants to face his patients with is their moral blindness towards the crimes they committed against some two million “communists,” amongst whom was his brother Ramli. As in his previous film the director has all the answers in front of his eyes, but keeps looking for remorse and moral repentance. At times his charitable quest is successful, at other times not so much. Good luck for your third installment in the Indonesian Genocide Trilogy, Mr. Oppenheimer! Maybe by the tenth installment the director will understand that evil is banal and any crime, however heinous, can be justified (it happens daily on every front page of our free press). What’s worse is that our outrage too can be easily manipulated, but the director seems fairly convinced that the world is really divided into baddies and goodies. Were the likes of Hannah Arendt and Primo Levi still alive (at least in our consciousness), The Look of Silence would be analyzed and judged for the piece of sensationalist voyeurism it actually is. But in this world thirsty for contradiction-free dichotomies, the film will probably be lauded like its equally facile predecessor. The naiveté and morbid emotionalism of the documentary is also peppered with moments of plain sadism (why would you show an old, sick man unable to walk while clearly in a confused state?). Yet the documentary’s most unforgivable shortcoming is its systematic refusal to investigate the very nature of its troubling subject matter: that is that there is no unspeakable crime people wouldn’t commit if given moral justification. To have the perpetrators regretting what they did without even questioning why they did it in the first place (not to absolve but to condemn them) is indeed a waste of time.