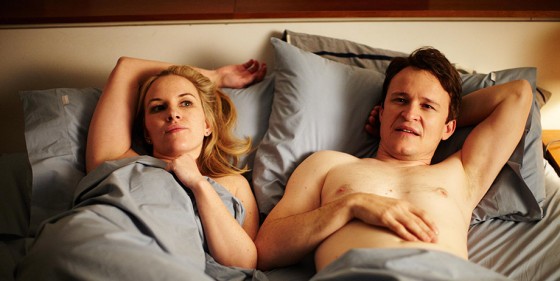 If nothing else, this Antipodean mash-up of Love, Actually and Neil LaBute’s Your Friends and Neighbors—a combo surely everyone was clamouring for—makes a convincing argument that “edginess” is the least appreciable thing that any text in any medium can strive for. Kicking off the first of its four not-really-criss-crossing subplots, Paul (played by writer-director Josh Lawson) is told by girlfriend Maeve (Bojana Novakovic) of her long-harboured rape fantasy, which he responds to with incredulity after hilariously misconstruing the key word as “rate.” From thereon in, Lawson weaves a thoroughly disagreeable tapestry of suburban couples’ sexual anxieties and fetishes, whose strained brand of risqué—each story is perched wishy-washily between LaBute/Solondz button-pushing and Farrelly brothers broad-yuks—would rankle less if the dovetailing narratives weren’t so undercooked themselves, both individually and in their interweaving. As the debut feature from TV actor Lawson, it accordingly looks and feels like a sitcom, and the modicum of goodwill generated by its rather sweet, very well-performed final vignette (involving a deaf-mute man using a female translator for phone sex) is undone by the half-assed note of serendipity that the film ends on. Ready-made to generate controversy for one queasy extended scene in which Paul devises a plot to have Maeve’s dark desires realized, The Little Death is really just best ignored entirely.