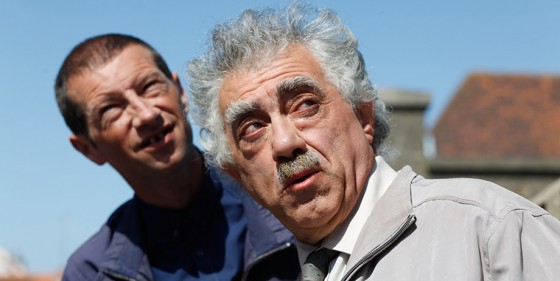 It’s not HBO, it’s (French) TV, and it’s also paradoxically the best movie that Bruno Dumont has made since L’humanite (1999)—a good point of comparison because Li’l Quinquin is basically a remake, give or take. Rural religious community? Check. Wobbly, possibly retarded police officer? Check. A random, ritualistic slaying? Check. Meditation on mankind’s capacity for evil? Oui, but of course. Working in an explicitly comic register for the first time in his career, the usually dour Dumont delivers something very rare: an epic-length farce that sustains both its tone and laugh quotient for over three hours (take notes, Judd Apatow). There are those who probably think that simply calling Li’l Quinquin a fine comedy underrates and undermines it, and they may be right: no less than L’humanite—or for that matter, True Detective, its true (anti-)spiritual sister—Dumont’s miniseries asks and addresses big questions about individual and collective culpability, and certain vignettes within these four episodes, like a funeral service attended by a masked killer in plain view and the fate of an Algerian boy with a crush on the town songbird, are unsettling. But it’s never overrating a work of art to call it a fine comedy, and in terms of all the things that have to happen for a film to be funny—you know: writing, directing, casting, staging, and almost impossibly fine-tuned ensemble acting even amongst non-professionals—Li’l Quinquin is extremely fine.  In addition—and this is no small point—it’s exquisitely well-shot by Guillaume Deffontaines, who creates an onscreen space drab and realistic enough to seem sufficiently Dumontian while still playing host to some almost Tati-ish sight gags. I doubt 2014 will yield a more inspired comedic character or performance than Bernard Pruvost’s Captain Van Der Weyden, a strange and memorable hybrid of Inspector Clouseau and Rust Cohle.