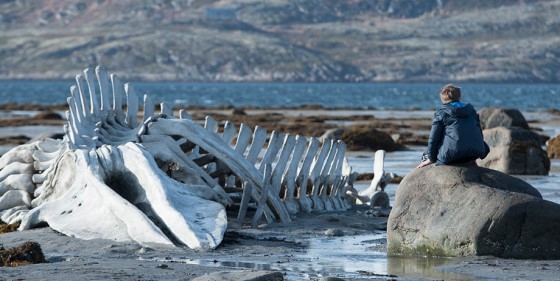 The dumbest thing about Andrey Zvyagintsev’s new snoozer, Leviathan, is his commitment to that title. Either he’s completely oblivious to the goings-on in world cinema since his last film, the rather great Elena (2011), was released, or he actually thought his effort would stand up well against Lucien Castaing-Taylor and Véréna Paravel’s homonymous, soul-destroying 2012 masterwork. This is not to ignore the Hobbes text, Cosmatos film, Wrest project, or Canada’s Wonderland ride (the latter of which, admittedly, did beat Castaing-Taylor and Paravel’s film by three months): it’s just that these singular powerhouses all have distinct places in the canons of their respective mediums, while a groundbreaking avant-garde documentary must now be confused and needlessly thrown into dialogue with Zvyagintsev’s relatively contemporaneous artsy fart.

The film itself isn’t so much dumb as it is an overly affected chore, purportedly reworking the Book of Job into a studied, Philip Glass-scored critique of Putin-era Russia. Awash with very, very meaningful images of the remains of colossal marine creatures, a sky always silvered in blue greys, and a portly mayor (Roman Madyanov) who at least a dozen viewers have already likened to Toronto mayor Rob Ford, Leviathan is immediately suffocated by the portentous weight of Zvyagintsev’s commitment to Serious Cinema. (Allegedly a satire, this film is not the least bit funny.) By the time the narrative graciously winds down, Glass’ score rises back to the fore, and you’re encouraged to wonder if you saw something more profound than you think you did.