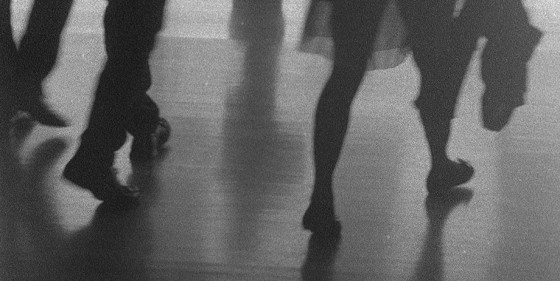 “In a world where everything seems programmed, even chaos, chance, or surprise, you’ve got to defy logic and bewilder people.” This is but one of the many lines of prose presented, without overt comment, in Le beau danger, written by the film’s subject Romanian author Norman Manea. However, this sentence seems as if it could serve quite well as an epigraph for René Frölke’s highly unusual documentary portrait. As if searching for a formal analogue suitable to convey some sense of who Manea is—a Jewish Romanian who survived both the camps and Ceausescu’s regime, a perpetually displaced, disrupted subject—Le beau danger disassembles the most basic elements of cinematic meaning. Indeed, large swaths of the film are comprised of Manea’s words, typed small across a white screen, converting the literary documentary into an occasion for communal engagement with the text itself. But more than this, Frölke takes sound and image apart, providing us with footage of Manea conducting interviews with absolute silence on the soundtrack, or passages of ambient sound that do not correspond directly with what is on screen. This panoply of technical interventions not only emphasizes the themes of exile that define Manea’s body of work, but helps the film speak to the disjunction between an author’s work and his public image. After confronting Manea’s stark, resonant prose, and its reflections on spaces transformed by loss and regret, it then becomes jarring to see the author doing press, or (in one odd scene) posing with children’s TV character Pocoyo in Torino. But this is the ordinary life of a creator, the business of getting work out into the world. Like the image or the sound suddenly dropping out, it doesn’t quite fit, but taken as a broad picture of a complex man, it certainly does. It defies logic, but generates a system all its own.