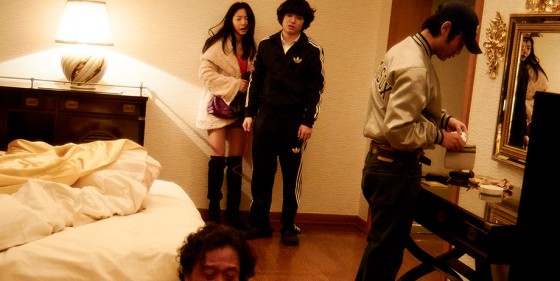 Not-so-fun times abound in this love hotel over the course of 24 hours. A sad-sack manager, who aspires to something more than cleaning up used tissue paper and stained sheets in his black Adidas jumpsuit, is the victim of a perfect storm of sexual embarrassment: his girlfriend shows up to sleep with a record mogul to further her career, and his sister from the countryside checks in to star in a porn film (to get over the tsunami, it is implied). There’s also an old maid who harbours a secret and an old man in her closet at home, two detectives engaging in an extramarital affair, a Korean call girl on her last night before shipping back home who has to deal with an angry john, and a slick yakuza lothario out to seduce a dopey teenage runaway. In other words, this screenplay drains the cliché jar dry.

I suppose that Hiroki Ryuichi—a former pink film director best known here for Vibrator—is taking a whirl at staying within his comfort zone while doing something more commercial (it’s made for Nikkatsu), and at this he triumphs, as this film is a bore. Besides what are perfunctory nods to current malaises in Japanese society, there’s nothing particularly special about Kabukicho Love Hotel, which feels like it’s been done hundreds of times before, and much better. You can make the Wes Anderson comparisons if you want, but the Grand Hotel template goes way, way, back; admittedly, I don’t believe it’s ever been done in a love hotel in Tokyo, but rarely has it felt so stale. The film isn’t helped by its at times jaunty soundtrack, an attempt to spice up the 134 minutes of tedium which just ends up seeming odd and contributes to the rampant tonal confusion.