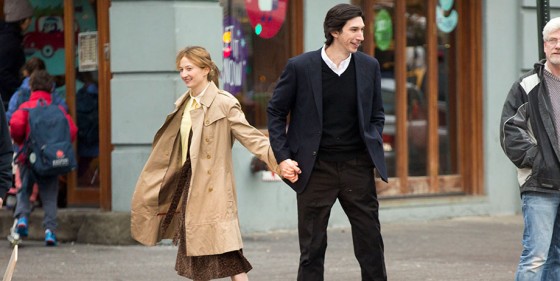 Jude (Adam Driver) and Mina (Alba Rochwacher) get stuck in a toilet together and fall in love, they marry and have a kid, but they won’t live happily ever after. Quite the contrary: once the newborn comes into their young and hopeful lives things get quite complicated, to say the very least. Mina turns out to be a vegan fundamentalist intent on starving her child to death, feeding him seeds, suspicious unguents and organic vegetables she personally cultivates on the apartment’s rooftop. Jude starts doubting his wife’s “natural ways” when the baby doesn’t gain weight and secretly feeds him meat, causing the situation to further degenerate. Later, Jude’s mother will put a rather undiplomatic end to this tormented family drama once and for all. Saverio Costanzo specializes in films and topics way bigger and profound than he can actually handle. He started off his career with a film about a Palestinian and an Israeli family having to live under the same roof (Private), continued with the spiritual dilemmas of a young priest (In Memory of Myself), and sinks here with a parental drama whose tragedy seems to overwhelm the director himself. Semi-reliable proof of Costanzo’s inadequacy came in the form of giggles during the press screening in Venice in front of a film whose subject matter is anything but funny. The film adopts a heavy-handed approach to explore a plausible issue and turns it into an implausible and ridiculous film. Is the director’s idea of psychological introspection really fish-eye lensing? Is having watched Rosemary’s Baby four times in high school a good enough excuse to make a movie? These and other puzzling questions await spectators eager to discover Costanzo’s craftsmanship. To be fair, the film does tangentially touch upon potentially interesting topics, such as the current trend of organic obsession as the other face of the post-human drift of modern societies, or how pregnancy and motherhood can be completely eradicated from the cycle of life and brutally thrown into the rat race of status symbolism, successful heterosexuality and so on. But the film’s aim apparently lies elsewhere. Should anyone find it, please let us know. On a positive note, fans of Girls might find Driver’s performance laudable.