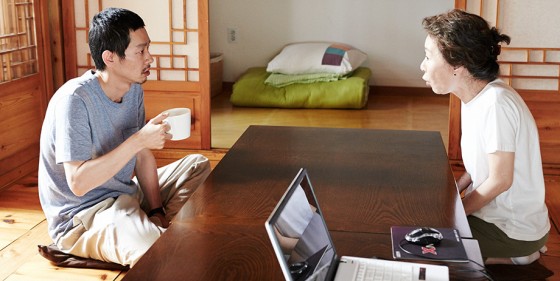 Recently, some South Korean masters have made significant inroads into the English market. (We can call them “masters,” if you prefer a grain of salt in your bibimbap: Kim Jee-woon and Park Chan-wook are inevitably problematic figures to some. But I’ll accept no guff regarding Master Bong and his Piercer of Snow.) But those guys were never exactly boutique filmmakers to begin with. By contrast, the ever-prolific Hong Sang-soo is a niche figure at home and abroad, unlikely to cross over into the major leagues no matter what he makes. Nevertheless, like his big-budgeted brethren, Hong has just made a film that is about 85% in English. Building, however inadvertently, on the relative success of In Another Country (2012), his bilingual collaboration with Isabelle Huppert, Hill of Freedom again finds Hong exploring his favoured themes and engaging in the structured dislocation that defines his aesthetic. Mori (Ryô Kase), a Japanese man, visits Seoul; speaking no Korean, English becomes the lingua franca with everyone he encounters. He has left a series of letters for Youngsun (Moon So-ri), the woman for whom he had complicated feelings. At the start of the film, we see her drop the letters on the staircase, falling this way and that. Their now-random order provides a semi-diegetic excuse for the scrambled chronology of the young man’s tale as told in flashback, but Hong is once again really using this physical dispersal as a metaphor for the complexity of memory. Not without reason are Hong’s films frequently compared with Rohmer, but with Hill of Freedom he displays a subtle kinship with Resnais. As usual, he is an artist who comprehends the unique nuances of cultural expression. (An early scene in which Mori becomes oddly effusive at the drinking table is a masterstroke of embarrassment, offset beautifully by the presence of an American hipster who lives in Seoul, speaks Korean, and has clearly absorbed the local manners.) The temporal dislocation only heightens the comedic effect of Mori’s frequently stilted behaviour. And yet, Hill of Freedom doesn’t rely on linguistic miscues for easy humour. Even in English, it’s one of Hong’s best films to date, and demonstrates that his jaundiced vision of Korean culture—soju rituals and awkward passive-aggression, intellectual self-absorption and a condescending attitude toward women—can transcend the specificities of language.