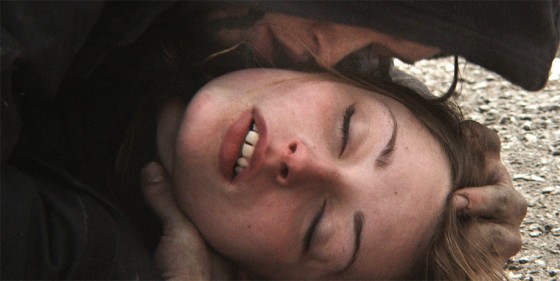 There are a limited amount of situations one can stage when endeavouring to show the daily routine of street junkies in a movie, and Heaven Knows What suffers from such limitation in its sincere but problematic attempt to chronicle the cyclical existence of a group of young addicts. Mood swings are the only variant in the monotonous existences of Harley (Arielle Holmes, author of the unpublished memoir on which the film is based) and her toxic associates as they go about their daily swindles, drug-taking sessions and consequent complications. The self-destructive love story between Harley and her immortal beloved (Caleb Landry Jones) is supposedly the film’s centerpiece, but it feels somewhat underdeveloped, not so much in terms of screen time as of emotional probing. The couple’s passion is tormented and dramatic on paper but hardly felt by the spectator.

For a film that quite openly chooses realism as its delivery tool, it feels strangely incongruous that the most poignant moments occur when it strays outside this register. We follow the characters from a very close distance but get to know them better when the camera decides to leave them to draw expressionist vignettes of evocative delirium. Invested by the synthetic virulence of the soundtrack, the film occasionally takes off towards a more inspired level, but exhausts itself a few powerful sequences, like when the contained derangement of a mental health facility is rendered through a furious, almost trance-like montage of hand-held shots visually mimicking the insanity rather than merely capturing it.

The acting unfortunately doesn’t help to disclose the epic essence of wasted lives staring indifferently at the fearful normalcy of life, resigned to the evidence that there is nothing left to lose since everything is lost already. This existential void, which the directors only vaguely sketch, should have probably been the film’s figurative core instead of the formulaic daily grind of junkies. The film exudes the rancid fragrance of expired grunge and cannot breathe new life into its subject matter, as if held hostage by its own narrative cliches. Yet however muted and muffled by malfunctioning cinematic devices, Heaven Knows What displays a certain courage in at least trying to tell an old story in a new language—athough it is admittedly difficult to look at the bottom of life from somewhere up above.