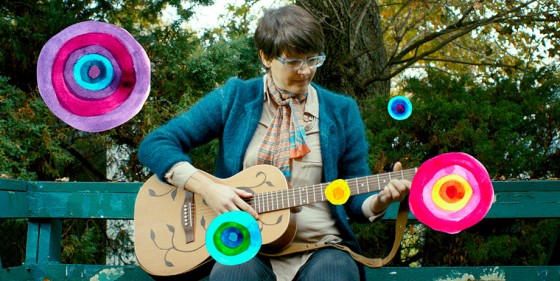 In which a lapsed Halifax folkie very gradually gets her groove back. It’s every bit as thrilling as it sounds. Look: it’s clear that writer-director Andrea Dorfman—making her first feature since the well-liked Love That Boy (2003)—adores her star Tanya Davis, whose droopy eyes and dopey smile don’t seem like a put-on, and it’s hard to begrudge a movie whose main point is that it’s better to try to come out of one’s shell than recede any further inside. Of course, it’s also hard to get too excited about that movie either, especially when it’s drab and pat and flaunts its crummy aesthetics like a badge of honour, as if the fact of its being palpably handmade instead of slickly mass-produced excuses clumsy writing, staging and ensemble acting. And it’s very clumsy indeed: dialogue bounces back and forth like the characters are running lines rather than actually chatting, scenes feel either drawn out or lopped off, and there are about as many time-passing musical montages as a Rocky movie, featuring earnestly strummed original compositions in lieu of Survivor. (Sometimes the songs are accompanied by animated graphics, as if Dorfman was trying to pump up the tweeness to life-threatening levels to distract from the familiarity of the material.) Heartbeat doesn’t mean any harm, but innocuousness isn’t a virtue. By the final meek-shall-inherit serenade, it feels like the movie is applauding itself along with its heroine.