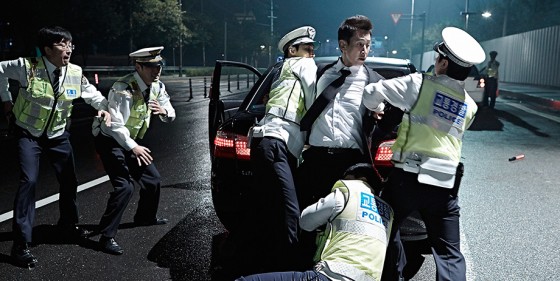 Part of the difficulty of City to City is uneven programming sensibility. It’s a difficult task, and an unenviable one, to try to represent any city or nation’s cinematic output with an eight-film snapshot, and diversity of approaches has to be a watchword. You can’t program a slate composed entirely of meditative art films, even though the very idea that TIFF would make that particular move is nothing short of a laugh riot. In any case, Kim Seong-hun’s deft but empty A Hard Day received solid notices at Cannes, so there’s no reason to blame the Torontonians for this dud. It’s sturdy enough, completely competent in every way, but it’s clearly Kim’s calling card for bigger and better things. The story of Ho (Lee Sun-kyun), a dirty cop who is called away from his mother’s funeral to purge the precinct of his team’s stolen money before an Internal Affairs sweep, A Hard Day plays on the Schadenfreude factor, as events go from bad to worse to worst. Kim’s chief identificatory trick is that Ho is a bastard but his opponents are worse. So we become invested in his getting away with everything despite the fact that, unlike the gangsters who try to best him, Ho was once honour-bound to serve and protect. Kim understands that split-second timing is everything, and he has built a reasonably effective tension machine. But for a film that strives to be hard as nails, A Hard Day is more like cotton candy, crackling on the tongue and evaporating instantly.