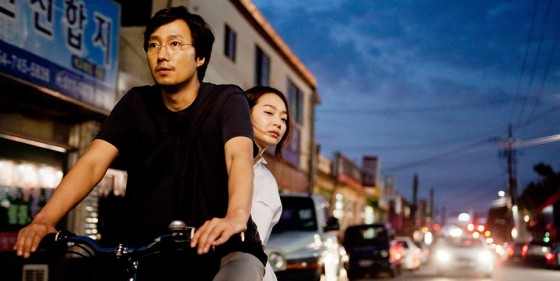 The deeply antisocial protagonist of Gyeongju, Choi Hyeon (Park Hae-il), is a well-regarded poli-sci professor in Beijing, back in Korea for the funeral of an old colleague. Recalling a memorable time he, the deceased, and another scholar had in the title-city many years ago, Hyeon returns to wander around in a doomed effort to recapture a long-gone period from his past. After several bungled encounters, Hyeon makes a human connection almost by accident; Yun-hui (Shin Min-a), the very patient proprietess of a teahouse to which he keeps returning, gives him the requisite smiles and nods of a professional server, banalities Hyeon mistakes for encouragement. (He is looking for a dirty painting that used to be on the wall, prompting Yun-hui to text a girlfriend about the “pervert” who won’t leave her store.) A clueless tagalong, Hyeon follows Yun-hui out to a bar to meet her friends, one of whom is a local prof who knows Hyeon’s work well, and wants to talk shop. “How long do you think the North Korean regime can last?” he asks. “A century,” Hyeon blankly replies, to the older scholar’s horror. When asked about reunification, Hyeon says he couldn’t care less, and that “my field is shit.”

Gyeongju is most definitely not shit, but it’s certainly just as awkward and insouciant as its protagonist. Zhang hasn’t really developed his halting, downcast style since his impressive sophomore effort Grain in Ear (2005). The structure and length of Gyeongju simply means that Zhang provides more of these static beats, with an unnerving concatenation that never speaks to any larger frame of reference. Hyeon has an unfortunate meet-up with an old lover, follows Yun-hui and a friend out onto giant green funeral mounds, has an imaginary encounter with his late friend’s widow … In terms of the blocking, pacing, and soju consumption, Gyeongju can’t help but seem like it’s working Hong’s side of the street. But in its occasionally maudlin touches and tinkly music cues, the film possesses a faint air of Hur Jin-ho’s middlebrow rigour. This is not a winning combination, and it’s difficult to understand how Gyeongju nabbed a competition slot in Locarno.