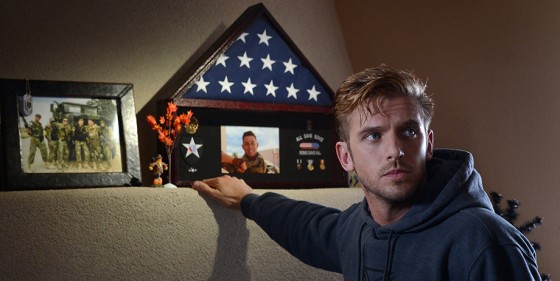 Still grieving the loss of their son Caleb to some unspecified military misadventure, the Peterson family finds their lives rejuvenated by the unexpected arrival of David Collins (Downton Abbey’s Dan Stevens), a handsome, polite young veteran claiming to have been “very close” to Caleb while serving abroad. David says he’s come all the way to the Petersons’ New Mexico backwater just to tell them all how much Caleb loved them. You might wonder if David’s hidden agenda involves telling them just how much he and Caleb loved each other, but an early smash-cut to a pumpkinhead scarecrow, the handmade poster for the Halloween dance, and the synth score seething with pulses, plunges and punches should alert you to The Guest’s inevitable slide toward something more literally monstrous than revelations of a beloved son’s secret sexuality.

Shades of Shadow of a Doubt, not to mention a certain recent action-thriller franchise, abound in Adam Wingard’s latest, scripted by regular collaborator Simon Barrett. The comic-book political commentary of You’re Next—whose affluent and doomed paterfamilias was a retired marketing strategist for a defense contractor—shifts from the periphery to the foreground with The Guest, in which US military secret operations come to assume the bogeyman role. As with You’re Next, The Guest demonstrates Wingard and Barrett’s facility with sculpting fresh, witty, tonally elegant first acts that gradually shift toward endings leaning heavily on genre tropes and extensive mayhem. None of which reduces the fun to be had in the film’s winsome thumbnail character sketches, well-chosen throwback stylistics and sociopathic glee. It’s just that I can’t help but wonder what might happen if these guys were to drop the crutches and let a story figure out how to walk on its own.