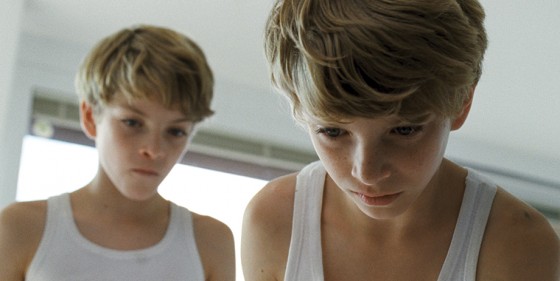 Don’t be fooled by the inane Haneke comparisons lavished by lazy critics on the first fiction feature by Veronika Franz and Severin Fiala, who previously made the beautiful portrait-essay Kern and the underseen drinking-game short Dreh und Trink (full disclosure: they are also my best friends, but that’s not why I like their film). Apart from being Austrian and toying with horror-thriller templates (and, perhaps, the coolness of its confidently composed images courtesy of Austrian stalwart DP Martin Gschlacht), this remarkably assured debut has little to do with the meta-shenanigans of Funny Games, even as it plays its own nasty little tricks with the audience—after all, the original title Ich seh ich seh is the German name for the guessing game “I spy with my little eye.” (It’s also clearly a film whose makers have a sense of humour.)

Opening with archive footage of a family lullaby from a pre-Sound of Music German von Trapp movie (meant to conjure the idyllic wholesomeness of the 1950s, but looking pretty creepy now), Franz and Fiala proceed to systematically take apart a mother-son(s) relationship, while stylistically moving from something close enough to “Austrian realism” towards increasingly disturbing irritations, culminating in full-frontal assault. With remarkable harshness, Susanne Wuest plays a separated mother, returning home to her remote, modern, chilly house in the provinces after a cosmetic surgery procedure with completely bandaged face and strict demeanour, which causes her twin sons (Elias and Lukas Schwarz) to suspect she’s been replaced by a sinister doppelgänger. The ensuing pas de deux of mutual distrust escalates as insecurity mounts on both sides, with the children’s natural recklessness and the withdrawn mother’s increasing desperation clashing tragically. Although the genre trappings are deftly applied, the force of the film has more to do with its atmosphere of uneasiness, intensified through mirroring motifs and unstable identities, plus a knack for memorable, richly metaphoric images: the twins jumping on shifting, muddy ground, a crazy accordion player walking through the streets of a deserted town (a moment worthy of Werner Herzog’s La Soufrière), a vision of a mother tied down by her responsibilities made literal in the Grand Guignol finale, capped with a blink-and-miss-it moment of ghostly apparition, to return to a vision of a family idyll, now turned inside out. A much-needed fresh breath in Austrian cinema.