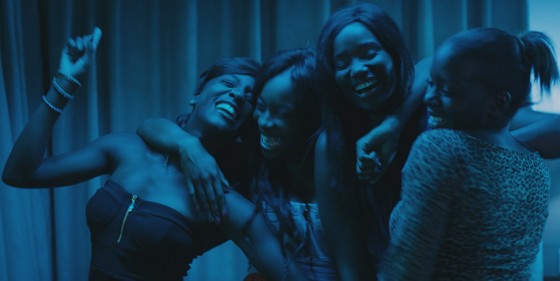 Céline Sciamma’s Girlhood, the opening night selection of this year’s Quinzaine des réalisateurs, is a case study in overestimating the capacity of an established methodology. Following the two modest, unassumingly insightful features (the sexual coming-of-age chronicle Water Lilies and Tomboy, an observant examination of adolescent gender awakening), Sciamma’s latest doesn’t expand her thematic spectrum so much as overextend her narrative reach. Again following a young Parisian girl at an ideological crossroads, the film brings dispossessed outsider Marieme (Karidja Touré) together with a trio of tough, nefarious females, who encourage her to change her name and her look as they work to establish their collective identity through methods only intermittently proactive and occasionally dangerous. The film works best as it sets up its character coordinates, pitting the gang of girls against the gaze of the local boys and their interests in contrast to cultural norms. In these moments the camaraderie between the girls is palpable and well-considered—never more so than in a neon-lit, exuberantly synced rendition of Rihanna’s “Diamonds,” a potentially disastrous, choreographed performance which skillfully engenders the viewer’s empathy while simultaneously testing the stylistic potential of the obviously industrious Sciamma. From here, however, the film devolves into a series of ever more contrived plot manoeuvres, moving from bullying and violence to pregnancies to dalliances in drug dealing. In an attempt to broaden her creative ontology, Sciamma reduces both her female and male characters to a series of stock, interchangeable personalities that no amount of aesthetic advancement can offset.