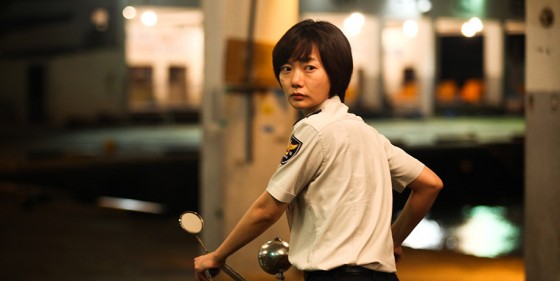 This well-received Un Certain Regard entry (the debut film from a protégée of Lee Chang-dong, who produced) has all the trappings of a serious festival entry, and it superficially shares a number of Lee’s thematic concerns: the big-city transplant stranded in a provincial backwater; the closed-minded, insular nature of said community of yokels; and the irrational, almost Kafkaesque tendency to ostracize and scapegoat the harmless outsider. But there’s something missing from A Girl at My Door, an element that renders it a bit less persuasive as an aesthetic project than the work for which Jung’s teacher is known. Lee’s work totters on the brink of melodramatic inscrutability, regarding social cruelty as a force pitched somewhere between realistic behaviour and somnambulistic toadyism. In other words, there is an underlying weirdness to Secret Sunshine (2007) and Poetry (2010) that makes them work. (Sometimes these odd aspects are chalked up to the much-discussed Korean penchant for “tonal inconsistency,” but it’s really more of a quirk particular to Lee, a distrust of realism’s cleaner lines.) Jung is clearly moving in that direction. But not having mastered that approach quite yet, Girl instead strikes a tone of implausibility at crucial junctures. Young-nam (Bae Doona, excellent) is a disgraced Seoul cop who gets involved with the horribly abused daughter (Kim Sae-ron) of the local fishing potentate (Song Sae-byeok); everyone knows he’s a creep but no one will stand up to him. Young-nam’s advocacy for the girl is complicated in the eyes of the townfolk when it’s discovered she’s gay. But how exactly this represented a scandal in cosmopolitan Seoul is never explained, a rather large gap in Young-nam’s backstory. Nevertheless, A Girl at My Door is well-acted and crisply shot, a highly assured debut from Jung who should have a bright future as she grows beyond Lee’s tutelage and develops her own voice.