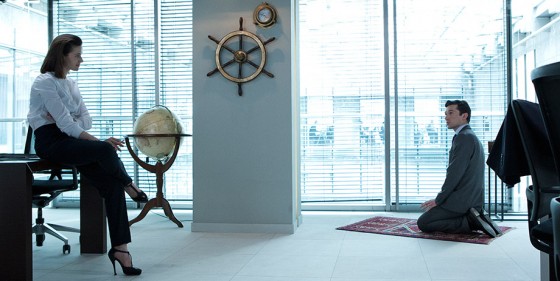 This is a complete mess, but I cannot honestly say whether Zanussi constructed Foreign Body to be exactly the film he wanted it to be and thus he’s just off his rocker, or if he has simply lost control of the medium. How best to describe this unhinged but futile film? In tone and construction, it strongly resembles the vulgar Euro-exploitation films of the 1970s, giallos and lesbian nun films which, like Foreign Body, usually had a fair amount of Italian money and “talent” in them. However, Zanussi’s film has a tone of moralism and consternation that drains any fun of ribaldry from it, so you have to imagine an exploitation film with all the naughty bits removed and replaced with ham-fisted allegory. Far from being a tongue-in-cheek hoot, Foreign Body is serious as a heart attack and twice as tedious to endure. The convoluted plotting seems almost to have been made up on the spot, and at times it feels as though Zanussi has forgotten major plot points. Angelo (Ricardo Leonelli) is a generically handsome moulded head who we first see enjoying bucolic bliss with his Polish girlfriend Kasia (Agata Buzek). Much to the dismay of both Angelo and Kasia’s wealthy dad, the girl decided to become a nun. So somehow this results (?!) in Angelo moving to Poland to take a job at a crooked energy firm under the she-wolf bitch reign of Kris (Agnieszka Grochowska). In time, there is double-crossing, attempted man-rape, lesbian shaming, time in a Russian prison (“You know how bad Russian prison is!”), and a subplot involving Kris’ mother having been an executioner for the Communists. The corporate stuff actually resembles De Palma’s Passion, but with any camp value replaced with self-importance and a thin visual layer of soap scum. (This is one ugly movie.) I have no idea what it’s supposed to add up to. Capitalism makes people ruthless? Religion can be a force for both altruism and selfishness? Look both ways before crossing the street? Sure to be one of the year’s worst.