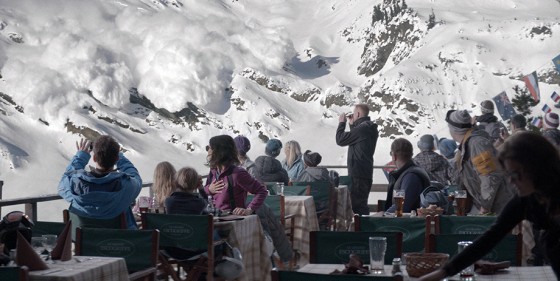 It’s hard to recall a recent movie that’s whiter than Force Majeure, and not only because it’s set in Sweden. Ruben Östlund’s third film takes place at sleek ski resort whose peaks and slopes seem pristine against the usual telltale marks of human incursion; here, the snow blankets everything, and even sometimes threatens to swallow up the high-rolling intruders in its midst. Lunching out on their hotel terrace with their two young children in tow for a family vacation (“no cellphones” is the motto), Tomas (Johannes Bah Kukne) and Ebba (Lisa Loven Kongsli) espy a “controlled avalanche” and keep calm, until it seems the cascade of powder is heading straight towards them—at which point Tomas hightails it solo. That his first response in the aftermath of this evacuation of any head-of-household gravitas is to claim it’s not possible to run in ski boots hints both at his character and the dry-ice tone of Östlund’s comedy of domestic disappointment, which asks the disturbing question of whether a single split-second act can (or must) (re)define a long-term relationship. (Force Majeure would make a good bi-hemispherical double-bill with Julia Loktev’s The Loneliest Planet.) Always staying just this side of easy bourgie-bugaboo torment via the grace of his excellent actors and his own focused but effectively off-kilter sense of humour—a suddenly activated remote-control flyer gets the biggest laugh—Östlund has crafted the best snowbound farce since The Shining (which it subtly emulates through date-stamped title cards and a key sequence on a vertiginous mountain road) and the best Swedish film about marriage since, well, Scenes from a Marriage.