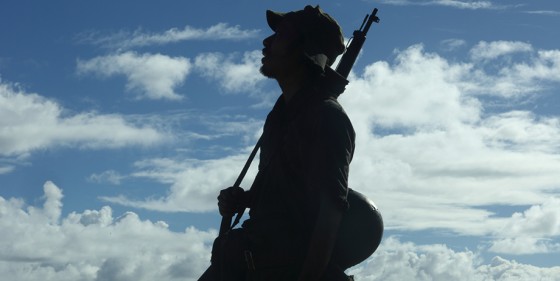 Few things bode less well on paper (or at least a page of the TIFF program book) than the prospect of the director of Tetsuo: The Iron Man and A Snake of June adapting Japanese literature’s most famous anti-war novel, a book that already yielded an equally venerated, Criterion-sanctioned film version by Ichikawa Kon in 1959. Given the apparent distance between the material and Tsukamoto Shinya’s default modes—body-horror bombast, Lynchian psychosexual melodrama, an alternately sensuous and punishing physicality that’s a carry-over from his parallel career in experimental theatre—Fires on the Plain ought to be as appealing as the idea of Eli Roth remaking All Quiet on the Western Front.

Yet the horrifying blunt force and almost relentless repugnancy of Tsukamoto’s effort prove to be the film’s greatest (if goriest) virtues. Indeed, the copious displays of blood, viscera and brain bits do not represent some kind of noble Spielbergian ambition to convey the full horror and confusion of warfare from the grunt’s perspective (a goal that, as Sam Fuller famously noted, could only be achieved in a movie theatre if a sniper was firing randomly into the audience). Instead, it amplifies the more hallucinatory and hellish elements that attracted the director to Ooka Shohei’s original novel, resulting in the rare film about war that contains not a speck of romanticism and even less of the usual glorification.

Set in the last months of WWII on an island in the Philippines, where the Japanese forces are descending to ever deeper levels of disorder, the story centres on a lowly private named Tamura (played by Tsukamoto) who is banished from his squad because of his TB symptoms but refused entry from a field hospital for not being sick enough. It’s no matter, because the hospital is soon bombed, leaving him to wander through a jungle populated only by shell-shocked youngsters, dead-eyed sadists, and starving men who can’t work up the will or the energy to kill themselves. When not tormented by visions of a local woman he shoots early in the film, Tamura tries to retain the last vestige of his humanity, principally by fighting the urge to feast on the flesh of his comrades.

Unlike Ichikawa’s more sombre and (inevitably) more subtle version, pondering the (a)moralism of men at war is hardly a primary ambition for Tsukamoto’s incarnation of Fires on the Plain: it dives into the abyss at the earliest opportunity and just keeps falling and falling. That it’s still distinguished by such a sense of command and even maturity is a greater surprise, given how little control Tsukamoto seemed to exert over careless recent efforts like his 2009 Tetsuo reboot. Here, he conveys a full range of rage and derangement with all the thuggish virtuosity the subject is due.