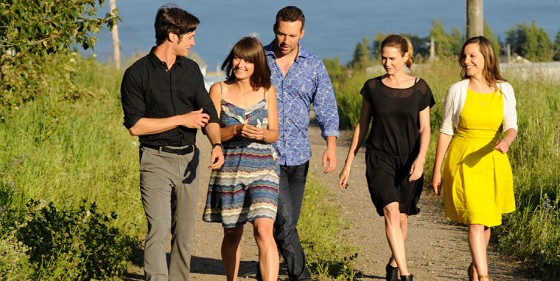 “Some people are stuck in a wheelchair and they’re happy, and others want to kill themselves when their poodle died,” a ponderous Adonis muses early in Denys Arcand’s tiresome An Eye for Beauty. That’s one of many meaningless canards spouted in a film that mostly scans as a dumb almanac for the Québec elite, a squad of healthily tanned thirtysomething professionals whom Arcand is fond of framing at play in synth-heavy, slow-motion tennis montages that only barely register as satire. Érin Bruneau plays Luc, the aforementioned fount of wisdom, a vaguely dissatisfied young architect with a depressed wife (Mélanie Thierry) tucked away like Bertha Mason in his beautiful custom-made home (overlooking the St. Lawrence River, naturally),and an Anglophone mistress (Melanie Merkosky) holed up in a skyscraper in Toronto. With a beautiful wife here and a beautiful girlfriend there, what’s a beautiful architect who makes beautiful things to do?

Unable to muster much in the way of tension, thanks to that napkin doodle of a plot and a pair of sublimely wooden lead performances, Arcand shoots for the moral complexity of Éric Rohmer and ends up with lesser Gabriele Muccino: a European-styled sex drama for people who don’t much like sex. Throw in the usual Arcand jabs at public health care and political correctness and you might just call it a movie. It’s not only the thinness of the premise that rankles: everything here feels off, from the incoherent Toronto geography to the tasteful humping of the overextended sex scenes to Merkosky’s equally dreamy, Egoyan-inflected delivery of lines as disparate as “He’s been the only man in my life, until now” and “Is granola okay?” Let’s give the last word to Luc: “Hockey, hunting, even love: It’s not enough.”