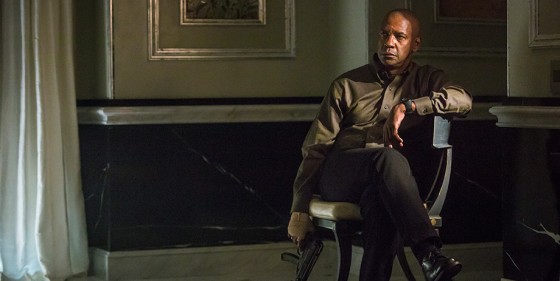 Looking back, it’s hard to believe that Training Day was as watchable as it was. (And it isn’t faulty memory or collective knuckle-dragging on racial issues. I caught it on cable a while back and it’s fine.) But Antoine Fuqua can’t direct, and this is abundantly clear in the opening seconds of The Equalizer. He and cinematographer Mario Fiore botch the standard-issue, over-the-bridge establishing shot with a lens flare that is more than phony. It’s so fuzzy and oversaturated that it makes the screen look filthy. Add to this a score that sounds like a waka-waka guitar and horn setting on a keyboard from the Salvation Army, and this pretty much sets the terms for the film we’re about to endure. It’s a combination of poor craft and giving zero shits, since The Equalizer’s target audience is presumably comprised of CSI viewers who want their movies to look as ugly as their TV. Saddest of all, though? Even Denzel seems like he’s asleep. This entire movie is far beneath Denzel’s pay grade, and he never lets us forget it; he’s done it all with more intelligence and conviction for Tony Scott, Spike Lee, and so many others. Washington isn’t ready to step into the well-worn loafers of Edward Woodward and his dangerous-old-fart TV show. So one of Hollywood’s most interesting actors is sent to kill Russian mobsters (the villains du jour), and by next year no one will even remember this happened.