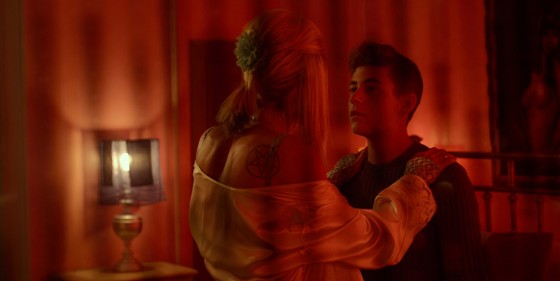 If Satan came back and saw the movies that were being made in his name, he’d never stop throwing up (pea soup, probably). Our Dark Lord is invoked routinely in Teen Lust, in which the virginal son of suburban Baphomet-worshippers endeavours to get laid before he becomes a sacrificial lamb—a premise already drained of its comic juice over a decade ago in the straight-to-video Scream rip-off Cherry Falls (1999).Which, it should be said, looks like The Devil, Probably next to New Pornographer Blaine Thurier’s abysmally produced comedy. Teen Lust barely makes it to feature length, and despite much (badly scripted) talk of penetration and money shots, contains no nudity and a whole lot of pinched, conservative sexual politics (though it’s probably supposed to be satirical that the prostitute character is an apostate of Hell). The wittiest and most progressive idea in the script, that our hero’s otherwise thankless hipster best friend might be able to save him with an impromptu bit of butt-fucking, isn’t followed through on; instead, the script conjures up a blandly “alternative” girl as a Holy Grail in contrast to the surrounding parade of dim bimbos.  Whatever charm Thurier’s previous lo-fi indies may have had has been replaced with the kind of crass yet neutered attitudes that seem to earn unworthy genre films commercial distribution in this country. Every weak one-liner or proudly shouted epithet is a sop to a mass audience that in this case is likely to remain entirely hypothetical.