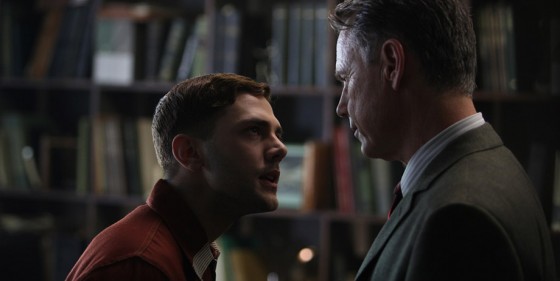 There are in fact multiple elephants in the room in this adaptation of Nicolas Billon’s play: the awkward struggle to cinematize a story designed to generate tension through sustained enclosure in a single location; the repeated deployment of an overarching metaphor to the point of exhaustion; and the showboating of Xavier Dolan as Michael, a psychiatric patient being grilled by the grumpy Dr. Toby Green (poor Bruce Greenwood) after his regular psychiatrist mysteriously vanishes.

Directed by Charles Binamé (The Rocket: The Legend of Rocket Richard), Elephant Song brims with unmotivated camera dips, lifts and pans to impose momentum, all of which is unnecessary since there’s more than enough going on in any one scene to hold our attention; more stillness surely would have served the script better. Meanwhile, the script over-stacks the stakes: a hospital scandal; divorced co-workers still wounded by a child’s death; a furnace that won’t work; a needy spouse left at home to babysit a niece with special needs (on Christmas Eve no less!). There’s an undeniably keen wit at work in the sculpting of Elephant Song’s tricksy narrative and abundant backstory, but it overwhelms the characters’ integrity: the plot is too dependent on Greenwood’s ostensibly sympathetic protagonist being kind of a nincompoop.

Michael, on the other hand, is a master manipulator, and Dolan, radiating Kevin Spacey levels of smug superiority, plays most of his scenes in that smirky way that says “Look at me—I’m a master manipulator!” Dolan is an actor with no lack of craft, and all of it is on display here. One day he will deliver a performance of greater substance, soul or humility, but Elephant Song is too content to applaud his scene-stealing chops and photogenic physiognomy.