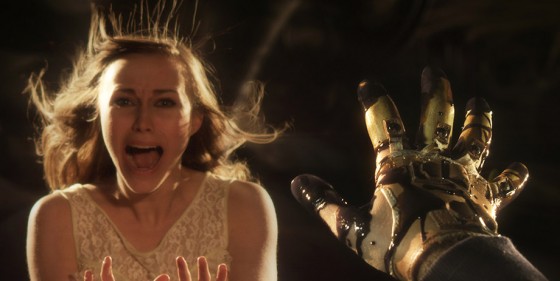 The Editor could have used one. Much like the previous Astron-6 production Manborg, this passionately scrawled love letter to Argento, Fulci et al makes a fetish of both its cheapness and its knowingness, neither of which seem very endearing after a while (let’s say about 30 minutes, to be generous). Co-director Adam Brooks certainly looks the part as the weary, moustachioed former master editor Rey Ciso, penitently serving time on an Italian horror cheapie whose set is populated by film-industry weirdos and real-life murderers. Not only is his crippled, suspicious splice maestro cutting together a vintage giallo, he’s living in one too.

It’s all very Berberian Sound Studio, except that in place of Peter Strickland’s nifty mixture of homage and formalism, Brooks and Matthew Kennedy (who also dons a stupid moustache to play a cop who suspects Rey of being a serial killer) overdose on jokes. The movie is over-scored, badly dubbed, and features obviously unmotivated lighting, because, well, that’s what all those movies are like, right? Sure, right…but who cares? It’s a fine line between paying tribute to and inadvertently insulting dated source material, and while the octogenarian Italians being toasted here probably don’t mind (just like they don’t mind it with Tarantino, who is this movie’s true patron saint), viewers who consider themselves true genre aficionados might wonder about the point of the entire enterprise. On a side note, top-billed Paz de la Huerta has turned into Jennifer Tilly so gradually that I didn’t even notice. That’s a compliment, by the way.