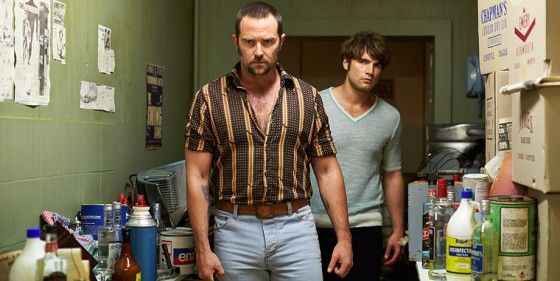 Though the title of Tony Ayres’ slow-burn thriller is borrowed from an Australian expression for a wild and crazy sort of fella, any potentially phallic connotations cannot be considered accidental. In fact, Ayres ultimately depends too heavily on Cut Snake’s most carnal element—a relatively novel re-ordering of the typical sexual dynamics between his three lead characters—to add vigour to a tale that resorts to clichés too often and doesn’t exploit its steamy potential as a full-bore melodrama until too late in the game.

The latter failing is especially disappointing given how badly Cut Snake fumbles its more conventional noir set-up. Merv (Alex Russell) is introduced as an upstanding young man with aspirations beyond his job at a broom factory in mid-’70s Melbourne. His adoring girlfriend Paula (Jessica de Gouw) is one of several signs of his imminent advance toward a respectable middle-class existence.

But into the fray comes James (Sullivan Stapleton), an old pal with a dangerous air and an alpha-dog demeanour. Given that he eyeballs a carpet razor while preparing his friend a drink, it’s clear that Merv immediately knows the threat that James poses. Nevertheless, Merv plays along in the hopes of keeping Paula in the dark about the fact that he shares James’ ex-con status. During a group outing with one of Paula’s girlfriends to a local club, James reacts with no little hostility when he’s embarrassed by a drag performer. But by then, flashbacks of Merv’s time in the big house have alerted viewers to the two men’s special history, one that adds another meaning to Merv’s evident efforts to live the straight life.

Though screenwriter Blake Ayshford adds some violent robberies to the mix, the triangle of love and lust between the men and Paula remains the film’s core focus. Nevertheless, lumpy, repetitive plotting keeps matters at a low simmer. Merv’s mildness is another issue, especially once it becomes evident that James may not regard himself as the aggressor in their relationship; it’s another intriguing variation on a well-worn template that Russell is not strong enough to plausibly sell. It’s a shame that it takes Ayres until the final scenes to realize that what he really wanted to do was make a Nicholas Ray movie, complete with a swoon-inducing score, a climactic crane shot, and lovers who risk being consumed by fires both literal and metaphorical. If only Cut Snake had come off the straight-and-narrow much sooner.