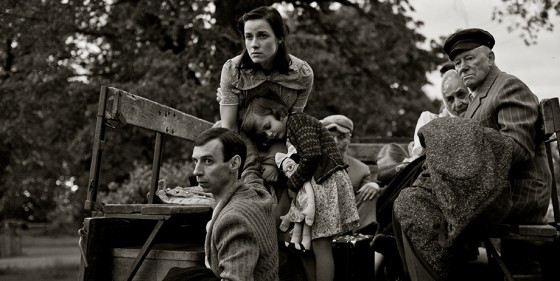 In 1941, Stalin ordered the ethnic cleansing of Estonia, Latvia and Lithuania, sending the native residents to Siberia. In one of the labour camps, separated from her husband, a young Estonian woman named Erna kept a diary, which became the basis of Helde’s film. Using a carefully constructed voiceover—the film’s uncanny soundscape consists of semi-diegetic noises, which are often slightly heightened or subtly disjointed—In the Crosswind relates her struggle to survive starvation and isolation.

In the opening scenes, before the forced relocation, Erna’s life is filled with magic-hour moments, but once Erna is transported to Siberia the film’s style shifts entirely, that opening idyll standing in stark counterpoint to her new situation. To highlight the sense of paralysis, Helde uses long takes that snake between her stock-still actors. Bidding farewell at a train station, ploughing fields, celebrating weddings; in each frozen scene, Erna tells us “time has taken on another dimension.” A little bit literal, perhaps, but Helde’s assured and skilled camerawork makes and keeps In the Crosswind moving.