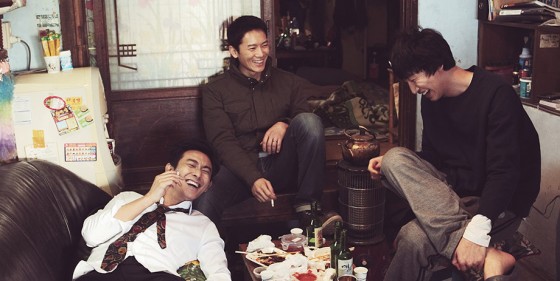 One of the stronger entries in this year’s showcase of Seoul-based filmmaking, Confession, by first-time helmer Lee Do-yun, takes a while to display its true intentions. Following a prologue in which we meet our three main characters as adolescents and witness a traumatic event that cements their long-term friendship, Confession jumps ahead to their very different adult lives. Min-soo (Lee Kwang-soo) is the fuck-up of the group; paramedic Hyun-tae (Ji Sung) the moral centre; and insurance investigator In-chul (Ju Ji-hoon) the pragmatist and manipulator. Plotwise, Confession bears superficial resemblance to Double Indemnity and, especially, Sidney Lumet’s final film Before the Devil Knows You’re Dead. This is a minor distraction, not only because the heist and investigation elements seem secondhand, but also because Lee tries to orchestrate certain twists and reversals that are frankly illegible. The good news is that the crime at the core of Confession is essentially a pretext for an exceptionally effective male weepie. The harsh realities of a stupid “good deed” gone wrong are all the more excruciating since they represent accidental betrayal of the most significant bonds in these men’s lives. (There’s even a hint of romance in some of these entanglements, although Lee plays it straight, quite literally.) Confession negotiates a surprisingly clean turn from standard-issue crime procedural into Nick Ray operatics. Recommended.