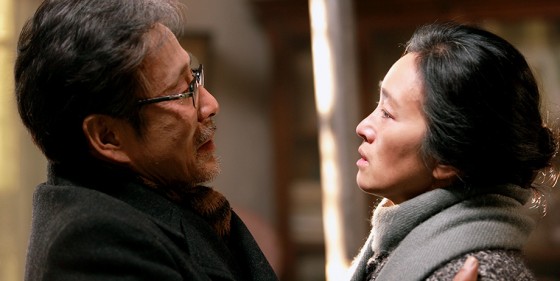 Admirers of Zhang Yimou’s ground-breaking work from the late 1980s and early 1990s might puzzle over his transformation from innovative artist to state-sponsored populist after seeing his latest domestic hit, Coming Home. A film not without interest, particularly considering it reunites him with his actrice fetiche Gong Li, star of those influential ’90s masterworks (Red Sorghum, Ju Dou, Raise the Red Lantern, To Live, etc.), as both reach ripe middle age. But maturity seems to have brought not wisdom, but some form of curdled resignation, at least to the director. Gong is her usual commanding screen presence, although she’s shed that mesmerizing primal-force naturalism of her younger years for a more self-conscious, Meryl Streep-esque command of her craft. Still, there’s much to admire in her performance, and in that of the always hard-working Chen Daoming, recently brilliantly impressive in a series of roles portraying post-macho, dignified, yet vulnerable males who enliven blockbuster space with their humane brand of charisma. In this case, he’s Lu Yanshi, persecuted as a “rightist” in various Maoist political campaigns, who after escaping from a labour camp in the late 1950s is betrayed by his family (for their own complicated reasons) and recaptured. After the 1978 reforms, Lu is officially released and tries to return to his wife Feng Wanyu (Gong), but she’s suffering from a form of cinematically enhanced temporary amnesia, and can’t or won’t acknowledge him.

A series of melodramatically heightened scenes, each directed and shot as if it were for a highlight reel, ensue, as does much audience weeping, if the film attains its objective. Its ideological objective, in this case, is particularly noxious, though not so surprising from an artist who’s given himself so totally over to the Party’s ideological line of the moment. Here, we are to learn that the true accounting of the crimes buried in our (families’ or nation’s) past(s) is impossible; nevertheless, one must live on, happily, domestically, harmoniously. How that lesson can be generalized to apply to the Chinese Communist Party and its current subjects is not so much left to as imposed on the viewers. For an antidote to this depressing line, see Wang Xiaoshuai’s Red Amnesia, also at TIFF, which seems (coincidentally, to be sure) to be conceived as a precise and devastating riposte to Zhang. In Wang’s vision, the past continues to define the present: a life worth living, for Wang, is predicated exactly on the necessity of acknowledging and accounting for past crimes; past traumas, un-repented, can only haunt and pollute the present.