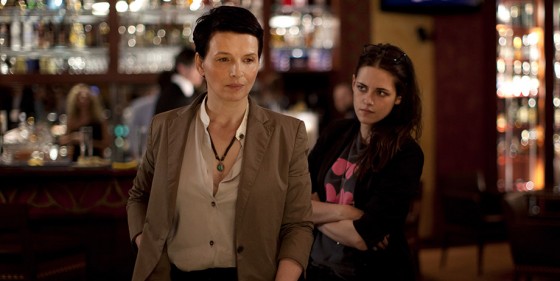 “It’s fucking brave,” says Valentine (Kristine Stewart) in defense of actress Jo-Ann Ellis’ (Chloë Grace Moretz) performance in the latest Hollywood big-budget goofy sci-fi superhero flick. Her comment is directed at her employer, Maria Enders (Juliette Binoche, typecast as a legendary French actress), but it could very well be a salvo against Stewart’s detractors regarding her own onscreen vampire-romancing exploits. Stewart’s critics will find little to complain about in Olivier Assayas’ chamber drama, though the online hordes may be bored since their beloved Bella isn’t quite the main attraction. A former superhero movie player herself (“I was Nemesis”), Maria is offered a part in a revival of Maloja Snake, the Sapphic two-hander that made her world-renowned at the tender age of 18. (The play is fictional, but recalls Fassbinder’s The Bitter Tears of Petra von Kant.) The catch? This time she’s been cast as the tragic older woman, with tabloid It-girl Ellis tapped for the scheming ingénue. In the lead-up to opening night, Maria and Valentine hole up in a chalet in Sils Maria, staging their own two-woman drama inside and outside of the text, as Enders reflects on aging and fame and Valentine wonders if their professional relationship has become too personal. Just as Irma Vep (1996) satirized the French film industry and international stardom, Assayas takes aim at the public and private personas of his actresses, both onscreen and off. Ellis’ wild-child antics (played with relish by Moretz) are only glimpsed on iPad screens in TMZ-style clips, yet in person the young hellraiser is revealed to be savvy and self-effacing. Maria’s acting has a tendency towards scenery-chewing, but it is really not so different than the theatricality that Assayas coaxes out of Binoche-as-Maria’s emotional outbursts. Valentine’s rehearsal line readings from Maloja Snake are stilted when compared against Maria’s, but that’s on purpose. Clouds of Sils Maria is a career best for Stewart, going toe-to-toe with the always formidable Binoche—talk about “fucking brave.”