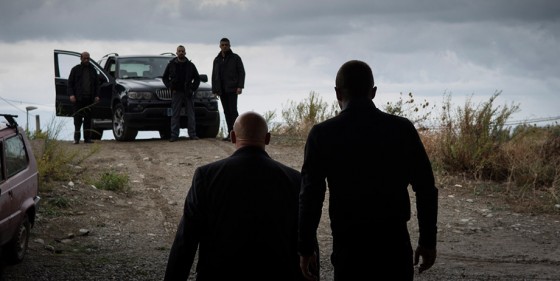 Italian films on the mob seem to do pretty well at the box office, be they about the cultural mafia that hangs out on the elegant rooftops of Rome sipping cocktails and talking crap, or the more venial kind that sees poor people exchanging fire in the suburbs of Naples. Black Souls aspires to be a variation sui generis of the canonical mafia movie, a sort of ethnographic study of the shifting generational paradigms of organized crime. Set in Africo in the southern region of Calabria—the undisputed kingdom of the ‘Ndrangheta, the local blend of mafia—the film stages a clash of civilizations taking place within a single family torn between ancestral rituals and the lure of a “cleaner,” urbanized underworld. Three brothers are at the centre of this anthropological crime saga: Luigi, the youngest, takes care of the drug trafficking that departs from Amsterdam en route to South America, passing by Milan; Milan-based middle brother Rocco recycles the dividends in the estate market, the stock exchange and other respectable businesses; Luciano, the eldest, couldn’t care less about his family criminal enterprise and would rather spend his days working in the countryside but is bound to it by blood. His son Leo, on the contrary, is impatiently eager to join his family’s activities, and demonstrates precocious skills at the shooting range. Thanks to Leo’s penchant for armed action, the whole family will be dragged into a feudal battle against a rival clan, which will result in a fratricidal war. While Black Souls stands its ground when walking the delicate slopes of ethnographic rendition, it fails to stand out for any other particular reason. It is beautifully lensed, soberly acted and directed, but somehow lacks that extra gear that would help it move away from the contrived machinations that the genre itself seems to impose.