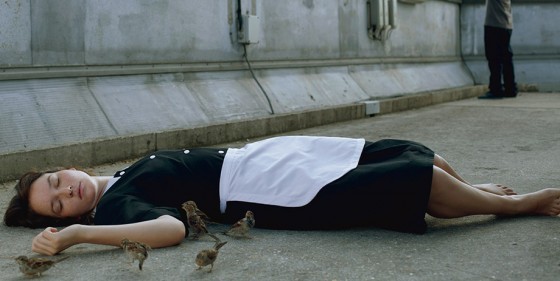 A film ideally screened at film festivals—where its scenes of characters logging into hotel wi-fi on their laptops and thrashing around in the throes of jetlag will pack an affective punch—Bird People has divided critics as neatly as its own bifurcated, his-and-hers narrative. Set almost entirely inside the confines of a Parisian Airport Hilton and starring Josh Charles as an American businessman and Anaïs Demoustier as a French maid, respectively, Pascale Ferran’s follow-up to Lady Chatterley pays roughly equal attention to these two protagonists. The Yankee businessman, who is in Paris to take a meeting about a globo-corporate construction project in Dubai, suffers a paralyzing emotional crisis and, after a restless night in his luxury suite, decides to skip his flight home. The fallout of this seemingly impulsive decision reveals a longer-standing desire to flee from every aspect of his work and life, the details revealed through a series of phone and Skype calls to people back in America.  As for the maid, she’s frustrated with rifling through the refuse of other peoples’ lives, and inwardly wishes for a change of pace. She gets it in short order, and her section succeeds in transforming the initially metaphorical title of Ferran’s parable of escape into a (ridiculously) literal proposition. Spoiler Alert: Demoustier transforms into a sparrow and flies around the interior and exterior of her workplace, becoming a kind of liberated voyeur whose uninhibited mobility mirrors the American’s passionately inchoate desire for freedom.  It’s this stretch of airborne avian whimsy—constructed out of adroit but hardly remarkable flying point-of-view shots that suggest Pazuzu dans la metro—that has created the love-it/hate-it buzz around the movie. And, since I don’t think Ferran’s late flight of fancy works at all—and gets far too cute to boot—I guess I have to put down stakes in the second camp.