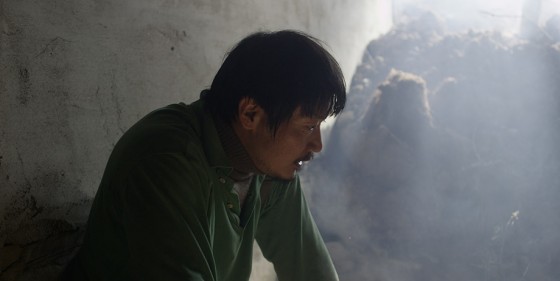 As with his debut film, 2010’s The Journals of Musan, Park not only wrote and directed but also stars in Alive, his second feature, which would be an impressive enough feat even if the film weren’t a gruelling three-hour workout. It could be overselling Park’s work just a bit to claim that there is no one else making movies like him, but trying to articulate their procedures or tie them to extant categories is quite difficult. On the surface, Alive is an extended glimpse into a few truly benighted lives, people yoked to each other by blood and held fast by the seemingly unbreakable shackles of poverty. Jeong-cheol (Park) is a construction worker who is trying to renovate a ramshackle lean-to, when he isn’t involved in backbreaking labour for his family’s survival. The construction job falls apart due to a crooked foreman, so Jeong-cheol ends up working with his mentally unstable sister Su-yeon (Lee Seung-yeon) at a tofu fermenting plant. (Nobody likes him there because he works faster than the long-time elderly employees.) Su-yeon’s manic self-abuse makes Bess from Breaking the Waves look like the picture of rationality; Jeong-cheol must look after her, her daughter Hana (Shin Haet-bit) and his dimwitted best friend Myoung-hoon (Park Myoung-hoon), who harbours a not-so-secret crush on Su-yeon. (He is so friend-zoned that he’s practically the only guy she won’t sleep with.)

In The Journals of Musan, Park’s protagonist was constitutionally incapable of functioning in the West. As a North Korean defector, he lacked the basic skills to negotiate late capitalism. His was a materialist problem, but everyone treated him like an alien. In Alive, Park has refined his method, producing a film that is both deeply realist and simmered in heightened affect, a combination of unusual and unlikely sources. (This is a hard-won dialectical approach: some scenes in Alive required as many as 80 takes.) In terms of its treatment of landscape, spatial articulation, and close attention to working bodies, Alive bears a resemblance to Wang Bing or even the Dardennes. At the same time Park abjures verisimilitude through tightly controlled situations and a sense of sociological entrapment much more in line with the codes of melodrama. Neither of these tendencies ever wins out in Alive; both are kept in a state of suspension, with an understanding that they are mutually conditioning factors. That is, Jeong-cheol’s hopelessness and bad fortune are both palpably felt and comprehended as a social effect. Add to this Park’s particular use of the film’s long form: although Alive is told in a linear fashion, there are numerous actions in the beginning of the film (e.g., Su-yeon’s self-torture in the abandoned building) that will only really make sense at the end, because Park organizes Alive a bit like a fugue. Information and identity are threads that weave in and out, but again, not in an ostentatious way. Alive’s mud-caked proletarian realism allows its deeper structures to remain largely submerged.