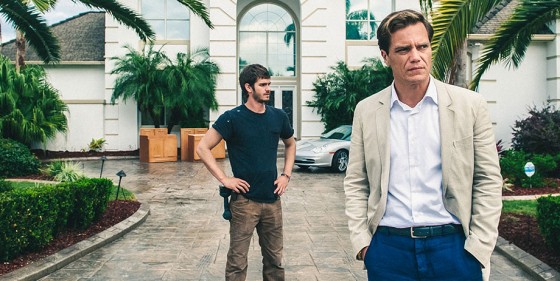 Dennis Nash (Andrew Garfield) lives with his mother and son in a home he thinks belongs to them, until one day one the ominously named Mike Carver (Michael Shannon), accompanied by a couple of zealous policemen, informs him and his family that it actually belongs to the banks. Kindly invited to get the fuck off of the property, Nash and clan end up in a folkloric motel where other victims of foreclosures noisily hang out. How does that saying go—“If you can’t beat ’em, join ’em”? That’s exactly what Nash, does becoming the right hand of Carver and his real estate company cum eviction cartel. Carver himself is not what you would call a “bad guy”; he has just decided that being on the winning side is better than being on the losing one. Initially hesitant, Nash is quickly won over by the fat checks Carver keeps handing out, until (surprise surprise) he can’t take it any longer, and decides that kicking people out of their homes just because they can’t pay their mortgage is unfair.

A Moral Tale drenched in good and altruistic feelings we thought only the Pope was capable of, 99 Homes is a 99-proof Hollywood flick that embodies the devastating consequences of the banking crisis in a standard-issue movie villain—it’s there to be defeated by the good guys. This is how it goes in Ramin Bahrani’s film: Carver is thwarted in his plans to profit off of the misery of others, and we see that benevolent heroes will save us from economic disaster. Only time will tell if our Great Depression will end following 99 Homes’ theatrical release, but for now we can maybe say that Bahrani is not the most realistic neorealist.