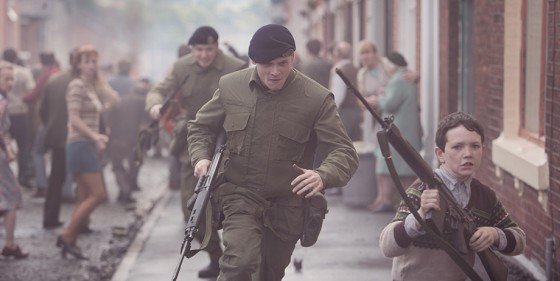 The Greengrass grows all over Yann Demange’s ’71, the latest example of a “historical” drama that believes that “immediacy” stripped of context equals the universal. Set in Troubles-troubled Belfast in the eponymous apostrophized year, the film follows a young English soldier, Gary Hook (Jack O’Connell), who gets separated from his unit after a riot in an Irish Catholic neighbourhood. On the run from Provo IRA militants, he spends the night seeking shelter from representatives of both sides in the conflict, and wouldn’t  you know it that each cohort evinces equal proportions of the corrupt and the caring:  he’s sheltered by the raven-haired daughter of an IRA man, while getting hunted by rogue Loyalist paramilitaries  who have covert agendas of their own.

TV-trained director Demange makes his feature debut here with a style that’s assured, but otherwise unremarkable. The action sequences are well composed and the violence and gore are suitably realistic; O’Connell gets gamely and convincingly pummelled time and again. For a thriller, the film is fine and easily digestible, which is precisely the problem. ’71 takes an ethno-nationalist conflict rooted in hundreds of years of colonialist history and makes it beige, apolitical and gutless. As is said, those who cannot remember the past are condemned to repeat it, and apparently also make mediocre films.