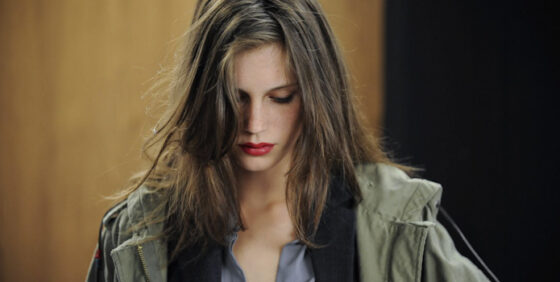 Not a Lana Del Rey cover, dommage, but a riff on his usual concerns of voyeurism, Gallic family strife, and the ambiguity of pretty girls, François Ozon’s Young & Beautiful is an accomplished trifle. We’re in Ozon country from the first shot, a young peeping Tom’s through-the-binoculars gaze at his sunbathing teenaged sister Isabelle (played by French model Marine Vacth). Isabelle’s on a precipice, about to lose her virginity to a German hunk on the last day of summer and, shortly thereafter, to take up a double life as a high-end prostitute. Her reasons are left opaque, but we get a hint in the skittish reactions of her otherwise alpha-male family members once she’s found out. The suggestion is that her known dabbling in the oldest profession makes Isabelle a sexual power broker despite her age and the tiptoeing politeness of those around her.

Ozon’s penchant for restricted chronologies—the three-month prognosis in Time to Leave (2005), the rewound affair in 5×2 (2004)—serves him well given the threshold his lead is standing on, and the haunted Françoise Hardy songs about girlhood on the soundtrack earnestly punctuate Isabelle’s seasonal progression through the year. It’s only when Charlotte Rampling shows up as a former client’s spouse that the seams start to show: her monologue about women and prostitution is patently false, a male provocateur’s lurid thoughts about women disingenuously fed through one of his most trusted collaborators. That final explanatory turn is a strange one for a film that derives most of its earlier power from things left unspoken.