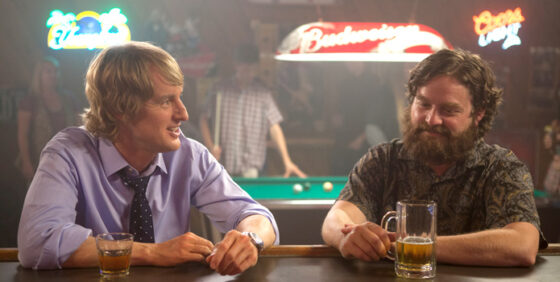 Owen Wilson coasts on his familiar faux-innocence and blank cheerfulness as Steve, a weatherman and serial womanizer. He deploys the same seduction speech on every female he seeks to bed, sex-workers included. Zach Galifianakis plays Ben, Steve’s squirrely, unemployable best friend, who seems about two bong hits away from becoming the Hippie Unabomber. Ben’s all about going back to the land, sticking it to the Man, and staying stoned every waking hour. Ben’s dad dies and leaves him $2.5-million in assets, including a farm that’s been in the family since 1860. Much to the chagrin of his straight-laced, business-minded sister (Amy Poehler), Ben plans to convert the farm into a utopian community based on some bleary-eyed Plato-Buddha fusion. As Ben’s behaviour becomes increasingly erratic, the story seesaws back toward Steve, who wants to get busy with Ben’s newly widowed stepmom (Laura Ramsey), to whom Ben’s dad left only “the stars in the sky,” which is apparently all this sanctimonious New Age babe wanted.

The fact that Mad Men is often praised for its cinematic qualities makes it that much more baffling to discover how closely Matt Weiner’s meandering feature debut resembles bad TV, or TV made bad by abbreviation. The characters are loaded with quirks but undernourished and finally stereotypical, deprived of coherent drives. Furthermore, given that they are the product of the creator of Peggy, Joan, and Mad Men’s other carefully textured women, the flat, brittle female characters are particularly disappointing. The score is incessant and too cute, the resolution bluntly forced by some misguided allegiance to genre, and the camera never seems to be in a decisive place, most especially in the gruelling scenes of physical comedy involving wrestling with an overweight security guard or an attempt to murder a chicken. One suspects Weiner was trying to serve too many masters: everything reeks of awkward compromise. You Are Here is all over the place.