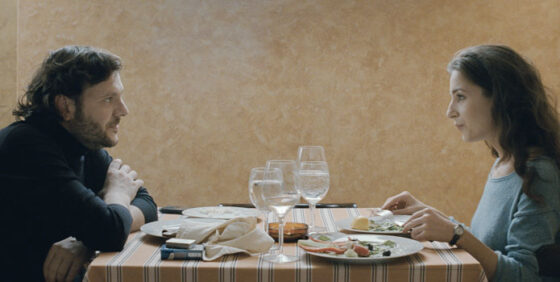 As celluloid threatens to go the way of the dodo, a number of filmmakers have been impelled to make work that takes the disappearance of 35mm head on, arguing for what will be lost when the world has gone digital. Comprised of 17 shots, none longer than the 11 minutes of a roll of film, Corneliu Porumboiu’s third feature, When Evening Falls on Bucharest or Metabolism (which could also be called Form and Function), presents a filmmaker, Paul (the great Bogdan Dumitreche), who on one of the last days of his shoot decides to fake a stomach injury in order to rehearse an intimate scene with his lead actress. Okay, to have an affair.

The Romanian dictatorship and its aftermath is the key theme of the Romanian New Wave, and on its surface, Porumbiou’s new film is an attempt to escape these shackles— but actually, the film holds a mirror to Romanian society, as its characters prove themselves to be acting in a mentality well-versed in dictatorship. Indeed, most of them cannot be trusted: lies follow one after another in this film, from the very first prolonged shot, which presents itself as a lecture on filmmaking and the long take but is actually a filmmaker (probably for the first time on film but not in real life) using film theory to pick up his lead actress. A brilliant screenwriter, Porumboiu consistently undercuts his surface-level material in ingenious ways (including, but not limited to, an endoscopy that presents itself as “the future of filmmaking”), and ultimately presents a film that illustrates there’s more to reality than a long take: let’s call it mise en scène, as this is a master at work.

Corneliu Porumboiu, TIFF 2013, When Evening Falls on Bucharest or Metabolism