TIFF 2013 | We are the Best! (Lukas Moodysson, Sweden/Denmark)—Special Presentation 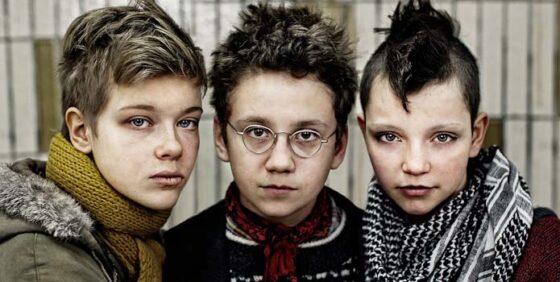 Boredom and sports are the most prominent enemies in the lives of two pre-teen girls in urban, middle-class Sweden in 1982, which gives them a perfect reason to form a punk band, even though they can neither sing nor play any instrument. Setting out to prove that “Punk’s not dead,” Klara (Mira Grosin) and Bobo (Mira Barkhammar) don’t even bother to build their fame, declaring in their very band name that “We are the Best!”

That peculiar mixture of slight megalomania and melancholic down-to-earth irritation which so defines puberty also informs this film, though in a considerably more breezy fashion, one reminiscent of Moodysson’s heartfelt view of adolescence in his first film Show Me Love. That debut set the terms for Fucking Amal, about two lesbian teenagers forced to fight prejudice their small hometown, and Lilya-4-Ever, about underage prostitution, after which Moodyson aimed for provocation with A Hole in My Heart.

Based on a graphic novel by his wife Coco, in We are the Best! Moodysson integrates the essence of the punk movement, grounded in an anti-establishment anarchy and the rejection of a conformist mainstream, into the universally troublesome time of teenage life, inhabited as it is blond high-school bitches, embarrassing parents, unreachable lovers, and constant feelings of isolation. Fine, empathetically ironic observation marks the characterizations of Bobo and Klara, who register as two very distinct presences. Amusingly, it’s Bobo, with her short and curly hair and oversized Harry Potter glasses, who sells the rebellious attitude better than the mouthy and mohawk-coiffed Klara. Atheism unites them, until they realize they’ll need the help of the slightly older Hedvig (Liv LeMoyne), a strict Catholic who is the only one they know who can actually play the guitar, who challenges Klara and Bobo’s punk claim that “God is a fascist.”

From there, the film becomes a funny and amiable chronicle of female friendship, capturing the wide range of emotions from sky-highs to world-ending lows, from trust to betrayal and the inevitable making-up. First love comes in and adds to their experiences, helping them to gradually assert their identities. And what better soundtrack along the way than thee one and only song they play throughout: “Hate the Sport! Hate the Sport!”