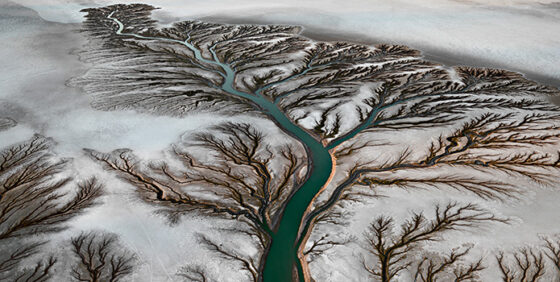 Moving from oil to water and proving the two can mix, Jennifer Baichwal and Ed Burtynsky reunite after their eco-tract Manufactured Landscapes for Watermark, which once again examines the intersection of humans and nature. This time around, however, the results are more meditative and philosophical. Burtynsky has taken on a co-directorial role, which shifts the emphasis away from his work and focuses on the eponymous element itself.

After a disorienting opening close-up of the pounding waters at the Xiolangdi Dam in China, we’re transported to the dried Colorado River Delta, the camera tracking along its cracked, parched surface. One simple edit conjures up a global water imbalance, collapsing thousands of miles as well as any illusions that our most precious resource comes without limits. The film is structured in these powerful cuts, which, though seemingly jarring, create a connective tissue between each locale. This free-flowing form is largely maintained throughout, though it does begin to ebb towards the end, as the film falls back on too many musical cues and slo-mo shots of beachside frolicking.

It’s also in these suggestive cuts that the film’s politics emerge, a stylistic choice that resists heavy-handed didacticism or a hysterical call to arms (though there is a pervasive sense of impending doom). The open-ended aspects of Watermark—its cyclical conception, its lack of conventional context for its imagery—might be read as a cop-out, or worse, as turning the horrific into the aesthetically sublime, the same charge that was levelled against Manufactured Landscapes. The latter stance gives little credit to the viewer, however. Through their awe-inspiring images of rivers and tides, Burtynsky and Baichwal carve out a space for reflection about where and how we mere mortals fit within this watery world.