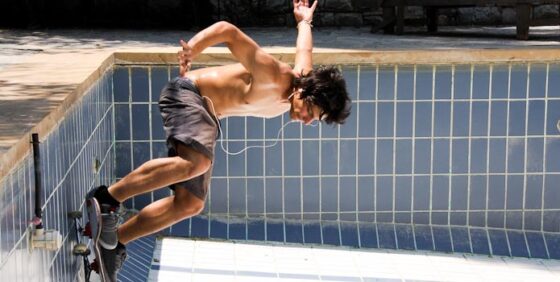 Incredibly, Argyris Papadimitropoulos’ and Jan Vogel’s sharply defined, co-written and directed look at an Athens teetering on the edge of mass social violence is only now receiving its Toronto premiere, which means that TIFF 2011 passed on one of the finds of Rotterdam 2011, where Wasted Youth premiered. (Let this be a lesson to Torontonians who naively think that TIFF is some kind of definitive sampler of the year’s best festival movies.) Inspired by an actual case of an innocent youth shot by an Athens cop—which almost became Athens’ equivalent of the Rodney King incident—the film’s scenario rigorously lays out the day that preceded the fateful event. Alternating dispassionately between blithe skateboarder Harris (Harris Markou, who would nicely fit into Larry Clark’s So Cal skater crowd) and uptight cop Vassilis (Ieronymos Kaletsanos), this is a piece of cinema that works its power both in the present moment as the characters’ parallel tracks gradually merge, and also retrospectively, as the viewer recounts the steps leading to the end. In ways that can’t be fully described, Papadimitropoulos and Vogel manage to avoid both psychologizing (including the cancerous dynamics between Harris and his bullish dad) and politicizing; the city and its people are viewed as they are, without judgment. In all the impressive output of recent Greek cinema, I can’t think of a more fully rendered and honest depiction of Athens, which plays a far greater role here than mere backdrop. The place is neither heaven nor hell, but a zone where a delirious sense of play and nerve-wracking paranoia share a pressurized civic space.