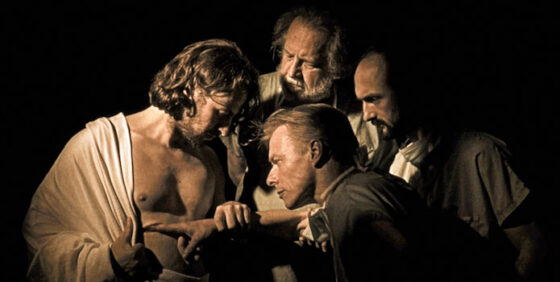 With Robert Lepage and Pedro Pires’ Triptych, you get three terrible films for the price of one. Composed in a tripartite structure, the film follows Michelle (Lise Castonguay), a schizophrenic second-hand bookshop owner who hears voices and self-harms with a rosary; Thomas (Hans Piesbergen), a brain surgeon with an unsteady hand which is only worsened by his alcoholism; and Marie (Frédérike Bédard), the former’s sister and the latter’s lover, a jazz singer who develops a tumour that Thomas must operate on, resulting in her developing aphasia. Based on Lepage’s play, the film version never transcends its theatrical origins, and is further encumbered by overwrought imagery—ominous flies buzzing around at a window, a ghostly apparition of a child in the forest, religious iconography dramatically cast to the floor—that makes it positively reek of cliché and pretension. The issue isn’t that the filmmakers have an absence of ideas, but rather that they cram their ideas down our throats in every scene. Lepage and Pires are attempting to explore the limits of language and memory, but the heavy-handed imagery and score (the violins are quite literally cued several times) undercuts any sense of philosophical inquiry. As poor Marie remarks at one point while watching a dull family film: “It’s trivial.” Yes, quite frankly, it is.