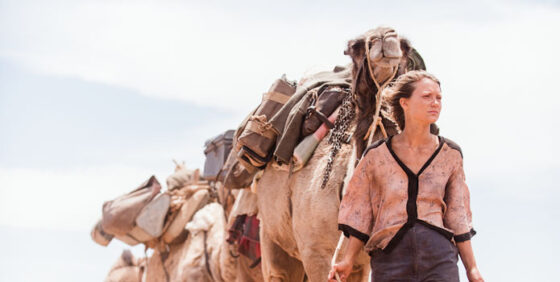 In 1977, Robyn Davidson set off to walk 1700 miles from Alice Springs to the Indian Ocean with her dog and four camels. This quixotic endeavour clearly must have meant something—not only to the 25-year-old but to the many thousands of readers who made her memoir a bestseller at the time and kept it in print ever since—but what? In her book, Davidson limply concluded that we’re as strong as we want to be, and that the first step is the hardest—clichés then and now.

In his adaptation of the book (scripted by Marion Nelson), John Curran eschews that kind of hollow moralizing, opting instead for Herzogian spectacle with discreet , if somewhat shallow, psychological underpinnings. Like many an adventurer, Mia Wasikowska’s Robyn seems driven less by where she is headed and more by what (or who) she’s getting away from—which is to say, everybody else. She’s a prime misanthrope who can’t suppress a grimace when she’s tracked down by her family and some friends shortly before the start of her odyssey, and who presents a pointedly cold shoulder to the National Geographic photographer (played with dorky charm by Adam Driver) who shows up to document her trip. More comfortable with animals than people, Robyn also proves capable of gunning down a horny bull camel when it comes to it (the movie’s standout, take-no-prisoners, “Robyn of Australia” moment).

Curran’s willingness to let the images carry the story marks a shrewd change of tactics after the intermittently impressive but over-determined Stone and The Painted Veil. For long periods the movie has no verbal exchanges except Robyn’s muttered self-recriminations after she loses her compass, or her exhortations to the sometimes-recalcitrant camels. Wasikowska is inspired casting, evincing intelligence and naïveté, determination and desperation, resourcefulness and vulnerability; her Robyn remains fixed on proving something to herself even if she isn’t sure what it is, and senses that public recognition can only contaminate her efforts. With the Weinsteins picking up North American distribution rights it wouldn’t be a surprise if the actress is touted for Oscar recognition, but whether this uncompromising, complex portrait of a stubbornly independent woman can win over voters hearts is another matter. More credit to the filmmakers for that.