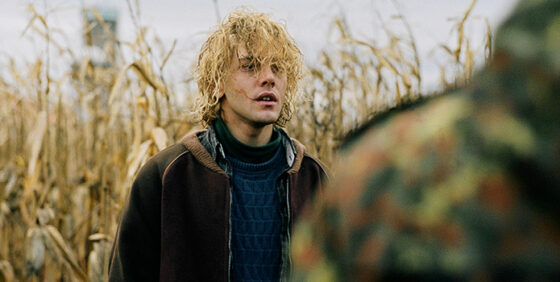 As the titular Tom, co-screenwriter-director-producer-narcissist Xavier Dolan sports a tangled blonde dye job that screams “city boy” even louder than his Montreal accent. Decamping to the Québécois wastelands for the funeral of his lover Guillaume, Tom is every inch the ostracized outsider, on top of which he has to play along with a series of embarrassing lies, starting with the claim that he and Guillaume were pals rather than bedmates—a convenient fiction conjured up for the benefit of the dearly departed’s dear old mum Agathe (Lise Roy).

Agathe is pretty slow on the uptake overall: besides being oblivious to her younger son’s sexual proclivities, she fails to recognize that his big (in every sense of the word) brother Francis (Pierre Yves-Cardinal) is a bullying sociopath and probably a closet case to boot. Francis’ clandestine physical and psychological assaults on his guest have the curious—as in never quite dramatically convincing—effect of turning Tom into a smitten kitten, although what’s really keeping Tom at the farm is not Stockholm syndrome but the heavy hand of a playwright (co-screenwriter Michel Marc Bouchard) intent on taking his long day’s journey into night all the way to the end.

When Tom at the Farm does eventually shift into thriller mode (though the admiring reviews from Venice lazily citing Patricia Highsmith, possibly because the main character is named Tom, would have us believe it works that way all along) the direction perks up slightly. A scene at a bar scored to Corey Hart gets ironic-pop props, and Xavier even plays at Christopher Nolan, swapping out his blocky aspect ratio for sleek widescreen during a highway-side chase scene. But all the pounding musical cues in the world can’t drown out the banality of the subtext here, which is that cute cosmopolitan kids—including also the very fine Eve Brochu as Tom’s lone distaff pal—are better off avoiding off-road backwaters lest they become initiated into barely repressed incestuous dysfunction. If the final shots of Francis bellowing helplessly as another little brother figure flees for higher ground recall the end of The Texas Chainsaw Massacre, it’s less a compliment to Dolan’s cinephilia than a comment on the barn-side broadness of Tom at the Farm’s rural-urban dichotomy.