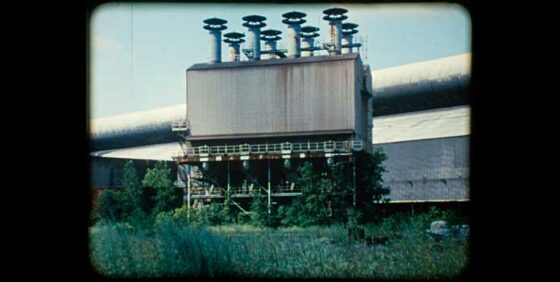 One of several triptychs showing in this year’s Wavelengths program, Peter Hutton’s Three Landscapes zeroes in on the industrial terrain ringing Detroit (where he grew up), the bucolic pastures of the Hudson River Valley (where he now lives), and Ethiopian salt flats (where he travelled under Robert Gardner’s sponsorship). The most obvious link between the three is labour, but the film functions less as a thesis statement than a poetic meditation, a haiku-like attempt to distill the landscape using a few sparing, echoing graphic forms. The Detroit sequence is the most immediately arresting, its subdued colour palette and precise graphic calculations of grass, clouds, sky, smoke, and industrial architecture leading to a dramatic chain of images of two men inching across a high ladder—a vision of meditative calm in struggle. Workers and clouds are combined to more expressly lyrical effect in a superimposition punctuating the Hudson River Valley sequence, a marvelous bit of photochemical guesswork (albeit one now rendered in DCP projection). If the Ethiopia sequence seems comparatively uncertain about itself, its final long take of a line of camels stilled by distance and heat closes the film with an eloquent appeal to the necessity of limits. After the screening Hutton remarked that he takes special pleasure in those landscapes in which you see clouds moving faster than the workers, a point of view that goes a long way towards restoring the link between the documentary and spiritual connotations of this word “observe.”