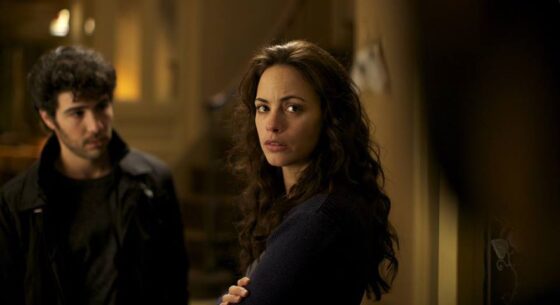 For most critics, there’s an implied schism between conventional, “well-made” films and more challenging, supposedly obscure experimental or modernist cinema. A film such as Iranian director Asghar Farhadi’s The Past (a French production that was an entry in the Cannes Competition and won the best actress prize for Bérénice Bejo) defies these stereotypes by being a purportedly “well-made” film that seems well-nigh illegible. In addition, since Farhadi is known for his theatrical finesse and screenwriting abilities after the celebrated A Separation (2011), it’s slightly baffling that the script of The Past is as full of holes as a piece of Swiss cheese. Curiously enough, Farhadi’s ineptitude—as well as the tedium induced by his film—makes it more difficult to decode than such assertively modernist endeavours as Leos Carax’s Holy Motors (2012) or Carlos Reygadas’ Post Tenebras Lux (2012). Neither Bergmanesque psychodrama nor unadulterated soap opera (although it certainly comes closer to the latter at many junctures), Farhadi’s familial melodrama is a thoroughly muddled effort without a clear agenda.

Unravelling the incongruities of the plot yields a few clues, albeit elusive ones. Ahmad (Ali Mosaffa) is summoned back to Paris from Iran by his wife Marie (Bejo) to finalize their divorce. Despite the couple’s decidedly chilly relations, the reasons for their split are woefully under-explained; Marie’s anger towards Ahmad seems primarily attributable to his inability to tolerate life in France. Ahmad himself is more or less a cipher who, despite having to endure the tantrums of an almost incessantly enraged Marie, is on surprisingly good terms with her children from a previous relationship. He also displays little jealousy towards Samir (Tahar Rahim), a married man with whom Marie is conducting an affair.

Much of the creaky narrative machinery hinges upon a secret harboured guiltily by Marie’s eldest daughter Lucie (Pauline Burlet). Not unlike the sudden appearance of a telegram in a clumsily wrought play or an inopportune text message in a tacky genre movie, most of the film’s dreary late sequences are bound up with a series of emails documenting Marie and Samir’s affair that Lucie sends to Samir’s wife, thereby triggering her suicide attempt. (There is so much boring hand-wringing about these emails that it might have been preferable if Farhadi had switched gears from domestic melodrama to science fiction so Lucie could have travelled back in time to avert pressing the ‘Send’ button.) In structural terms, the emails are something like the symbols in Ibsen’s plays: the wild duck or the spire constructed by Halvard Solness in The Master Builder. Unfortunately, Farhadi lacks the poetic dexterity to make these emails function on a metaphorical level, and the device just comes off as embarrassingly clunky.

Through all this narrative fog, it seems apparent that The Past is instructing us, however boringly, on how supposedly rational people become mired in repetition compulsion and are doomed to blindly repeat previous mistakes. It doesn’t go unremarked, for example, that Samir is little more than a younger, more energetic version of Ahmad; following up this doppelganger motif, one has to give credit to Farhadi for casting Burlet, who bears a striking resemblance to Bejo. Yet all of these mirroring devices shed little light on the characters’ inner lives, a component one might reasonably expect to be present in a well-constructed script. In addition, Marie is depicted as such a shrewish character that it’s surprising that, while a few critics became apoplectic about a male director staging protracted lesbian sex scenes in this year’s admittedly mediocre Palme d’Or winner, no one to my knowledge has commented on the far more misogynist subtext of Farhadi’s emotional landscape, where the women are usually choleric and gratingly neurotic and the men, while perhaps confused and weak, are at least well-intentioned.

In the final analysis, The Past is a trial to sit through because almost every scene takes a confrontation as its departure point, and unlike, say, Maurice Pialat, Farhadi is not able to depict this sort of unrelieved emotional turmoil in a cinematically effective manner; the film’s unsubtle nature ordains that many of the arguments take place during pouring rain, as if the weather was needed, via some sort of cinematic pathetic fallacy, to reinforce the rhetorical storms on screen. Despite his reputation as a scenarist, Farhadi’s direction is actually somewhat more serviceable than his writing, if you have a taste for television-style two-shots and bland compositions. (Though as Manohla Dargis observed in The New York Times, Farhadi does have a talent for fluidly moving his characters through rooms.)

Perhaps another part of the problem resides in the fact that, either consciously or unconsciously, Farhadi expunges politics, or anything even resembling social commentary, from his narrative. Some years ago, Fredric Jameson made the controversial assertion that even superficially apolitical Third World literature functioned as a form of national allegory. While The Past’s French pedigree makes it a First World artifact, Farhadi’s Iranian films, including the overrated but still affecting A Separation, certainly can be assessed as allegorical statements on the alienation of an urban middle class coping with the demands of a theocratic state. By contrast, The Past is the modern equivalent of what used to be termed Euro-pudding: co-productions designed to involve the widest possible audience that lose all sense of regional specificity in the process. There are hints that Farhadi is making some sort of veiled statement concerning the anguish of Iranians torn between lonely exile and a homeland where life has become practically unbearable. But connecting the political dots is a more or less futile task when dealing with a film that seems almost as clueless about private life as it is about the public realm.