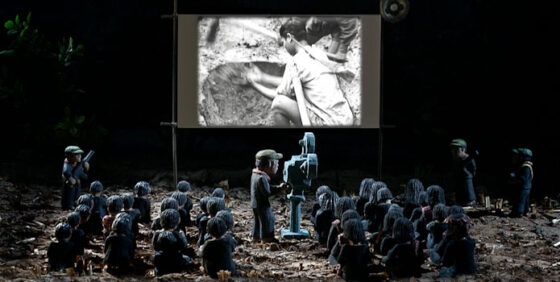 The eventual Un Certain Regard prizewinner, Panh’s The Missing Picture parts with the formal orthodoxy of his previous films on the subject like S-21: The Khmer Rouge Death Machine (2003) or Duch, Master of the Forges of Hell (2011), for the first time using both found footage (documentary and fictional propaganda films made by Pol Pot’s regime) and voiceover narration, based on the autobiographical parts of Panh’s book The Elimination (an English translation of which was published earlier this year). “If I close my eyes, still today, everything comes back to me. The dried-up rice fields. The road that runs through the village, not far from Battambang. Men dressed in black, outlined against the burning horizon. I’m 13 years old. I’m alone. If I keep my eyes shut, I see the path. I know where the mass grave is, behind Mong hospital; all I have to do is stretch out my hand, and the ditch will be in front of me. But I open my eyes in time. I won’t see that new morning or the freshly dug earth or the yellow cloth we wrapped the bodies in. I’ve seen enough faces. They’re rigid, grimacing. I’ve buried enough men with swollen bellies and open mouths. People say their souls will wander all over the earth,” reads one significant passage, pointing to Panh’s most flummoxing innovation. The (fascinating) found footage aside, he uses handmade clay puppets to illustrate and occasionally expand on the voiceover—the voice clearly not Panh’s, further complicating the issues of representation.

As the camera pans through these tableaux morts, the frozen puppet plays nevertheless exude a sense of archaic, almost childlike wonder, clashing with the terrible recollections on the soundtrack. There is a spiritual dimension to Panh’s strategy, in that he is looking for the soul of the dead: “What is the soul? Earth, wind, water, fire,” he said when explaining his decision for clay figurines to Cristina Nord in a recent interview, adding that “statuettes have a soul.” But as implied by the title The Missing Picture and discussed in the voiceover, there is also a haptic quality that governs Panh’s memories: he remembers not so much images as the touch (which also brings to mind the perpetrators re-enacting torture in S-21, resulting in unconscious, thus horrifyingly casual illustrations of body memory). Panh’s burnt clay theatre meshes perfectly with the justified pathos distinguishing the narration, while—intensified by complex negotiations with the historical film material—he proposes a miraculous method to represent the unrepresentable.