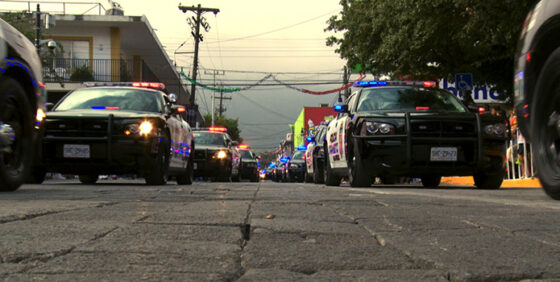 It’s not surprising that Mexico’s drug war can verge into surrealism, as Mexico oozes with surrealism. But there are many shades to this condition, and The Mayor captures one of them with just about the right deadpan tone. In the wealthy Monterrey suburb of San Pedro Garza Garcia, the country’s statistically safest town, the popular mayor Mauricio Fernandez does things his own way to make sure that drug kingpins know they’re not welcome. We won’t describe here exactly what he does—that would spoil the fun. Let’s just say that the man is a bit off the books, and the locals generally seem to love him for it, sort of in the way that the villagers liked the Magnificent Seven for their proactive stance against the bad guys. Yet co-directors Emiliano Altuna, Carlos F. Rossini and journalist Diego Osorno (who has reported extensively on Mexico’s drug cartels) uncover a more complicated man than a mere enforcer: Fernandez is a genuine eccentric, whose collection of art and objects of all imaginable shapes and sizes is about as indescribable as his taste in home interior design. Those ready to mock a determined drug warrior—since that’s what the movies generally do—will be disarmed by this movie’s discovery of a character worthy of a damn good novel.