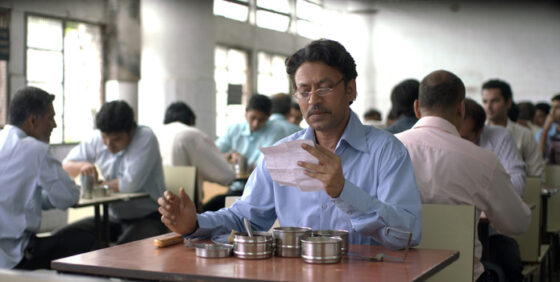 There’s a certain simple charm to Ritesh Batra’s debut The Lunchbox. The film follows lonely housewife Ila (Nimrat Kaur) and curmudgeonly widower Saajan (Irrfan Khan), who are brought together when the lunches she lovingly cooks for her adulterous husband are misdelivered to Saajan. After discovering the error, the two begin passing notes in the container, joined in an epistolary and culinary correspondence. Clearly toying with the conventions of romantic comedies, The Lunchbox constantly walks on the edge of the saccharine, usually managing to pull back before things get too sweet. It’s not entirely displeasing to be jerked around as such, though the pacing eventually becomes belaboured and suggests a lack of confidence on the filmmaker’s part—especially given the fact that when Batra does commit to his story in the final act, he finds a darker, more compelling edge.

Weaving sequences of vérité-style social realism of the streets of Mumbai with controlled, static shots of each protagonist in their respective home and work spaces, Batra shows an eye for both styles. These shifts are in line with the screenplay, which vacillates between cartoonish comedy (the off-screen voice of “Auntie,” who shrilly yells advice about cooking and love to Ila from the apartment above) and sombre drama (news of a mother jumping to her death along with her child, which Saajan fears could be his newfound pen pal). Unlike so many mainstream romantic films that give way to some happy conclusion, Batra does have the confidence to opt for an ambiguous ending. Leaving Ila and Saajan’s tale open-ended, the film refuses the old adage that all you need is love, rooting both their stories in harsher socio-economic realities. The film is slight, but there’s enough there to pique interest in what Barta does next.